First off, let me apologise for there being no soup recipe last week - possibly the first time I've ever missed a post (but not really - it seems I've missed quite a few...)  Anyway, the reason for my absence was that I was in Bruges, enjoying the sights and tastes of a quite beautiful city.  I ate deep fried gravy (Bitterballen)  which has already featured on the blog, and Flemish Rabbit stew, which I shall attempt to replicate this weekend (Any Belgian readers who have a recipe, feel free to send 'em my way...) as well as many, many beers, waffles and frites.

Over the next few weeks, I'll be having a Belgian soup special, in the manner that last year we had Dutch week, so stay tuned for that.

In the meantime, let me introduce you to this week's soup.  Regular readers may remember my dismay when a few weeks ago, my vegetable box did not deliver on its promise of parsnips.  Well, this week (Huzzah!!!) there be parsnips in that thar box (Did pirates eat parsnips?) so I can make parsnip soup. The vegetable box, by the way is from Yorkshire Farm Shop

The last time I tried to make parsnip soup, it was a parsnip and cranberry recipe that ended up like pink wall-paper paste, so this time I was determined to avoid repeating that mistake.  I can't stand those soups that are thick and gloopy, so I always strain through a sieve or add more stock to keep the consistency, well, soupy.

I guess you could make it without the crispy bacon bits, and use vegetable stock instead of chicken if you are a vegetarian (or 'fussy eater' as my Grandma would have put it)*

*My Grandma's views are not the views of Soup Tuesday or its writers...

Method
1.  Heat oven to 180ºc.  Peel the parsnips and cut into sections.  Slice the onion into wedges.

2.  In a bowl, mix the parsnips and onions then drizzle them with oil, the spices, ginger and garlic, then add the honey an mix everything together so the vegetables get coated in all the other flavours. (Really get your hands stuck in there, as Jamie would have it, or you could just use a wooden spoon and not get your hands all sticky...)

3.  Roast Onion and parsnip for 30 minutes, until everything is nice and golden brown.  Check regularly, so the parsnips don't burn.  You can always add a little more oil if you wish.

4.  Remove from the oven and allow everything to cool for a while.  Peel and cub the potato and carrot

5.  In your soup pan, heat some oil, then fry the carrot and potato until they start to brown.  Then add the stock to the pan, as well as a few sprigs of fresh thyme.  Bring the soup to the boil and then cover and reduce to a simmer. Cook for 20 minute, or until all the vegetables are soft

6. Meanwhile, make your parsnip crisps for garnish.  Slice a parsnip very thinly - you could use a mandolin, but I just used a vegetable peeler.  Coat the strips in oil, season and then the oven on a baking tray, pre-heated to 160ºc for 25 minutes, turning half way through.  Also, I fried some bacon until crispy to use as a garnish as well

6.  Remove from the heat and allow to cool, then blend until smooth, return to the pan and heat through and serve, garnished with the parsnip crisps and crispy bacon.  Enjoy!
Posted by Dan at 19:32 1 comment: Links to this post 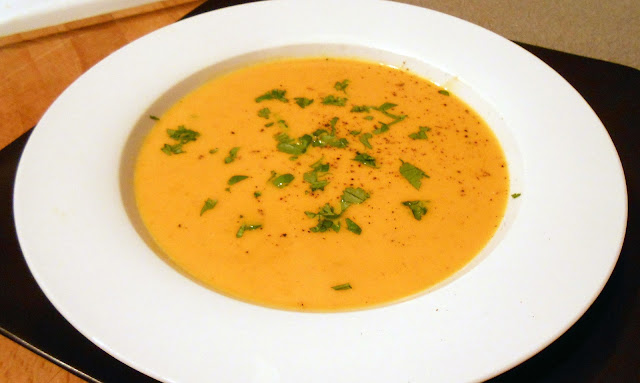 Ahhhhhh!  That was the sound of panic when the doorbell rang this morning at 7.15.  Not because I was still in bed and there was someone at the door, but because the person at the door was our lovely veg box man.  Don't mis-understand me - there was nothing actually wrong with the veg box, nor the hour of its arrival (although a more fashionably late hour would suit me better)

No, the cause of my outburst was that there was meant to be parsnips in the box this week, which were going to form the basis for this weeks soup, Curried Parsnip.  Only, now bereft of parsnip, what is a boy to do?  Well, what is that I spied in the veg box, nestled under some cabbage and next to the potatoes?  Carrots?  Still covered in mud you say?  Well that gives me an idea... 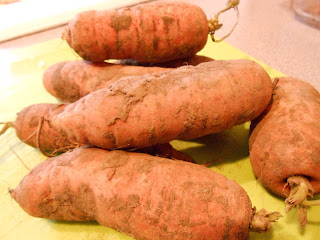 I told you all a while ago about the first ever soup I made, minestrone as part of a home economics class when I was 12? Well today I'm going to tell you about the first soup I ever cooked to impress a girl...  Carrot and coriander soup.  This soup seems to be a bit of a student classic, probably because it's cheap and easy to make, healthy and quick, and there are hundreds of ways to do it.

Some people add lentils, some tomatoes, cream, sour cream, coconut milk.  It is, in a nutshell, what is brilliant about soup - it's tasty and it's very hard to mess it up.  So I thought it would be perfect for impressing a girl that I invited to come round for a meal.  It was the first time I'd ever cooked to impress, so needless to say, I was worried.

The soup simmered away, with vegetable stock as she was a vegetarian, not too much chili as she didn't like her food too spicy. The ginger and lemon a sharp counterpoint to the earthy carrots sweet tomatoes and spices.  It was perfect...

She turned up, the lights were low, the music was soft, the chat was small, and then I dished up the soup and... she loved it, was very impressed - in fact, it was the best carrot and coriander soup she'd ever tasted - even better than her friend who worked in a vegan cafe made (which was previously the pinnacle of soupy perfection for her)

I could hardly believe my luck.  Maybe there was something in this cooking malarkey after all.  And then I served the main dish - tandoori salmon, choked on a fish bone and spent the next three hours retching and coughing like a cat coughing up a hair-ball...  The girl left rather quickly after that... 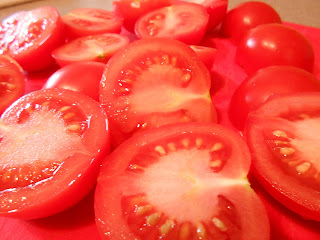 1.  Heat the oven to 200ºc.  Cut the tomatoes in half and de-seed.  Put them in an oven dish and drizzle with olive oil.  Sprinkle on a pinch of dried oregano and a splash of balsamic vinegar, then a pinch of salt and pepper.  Put the dish in the oven and roast the tomatoes for 35-40 minutes, until they have started to brown.  Remove from the oven and set aside. 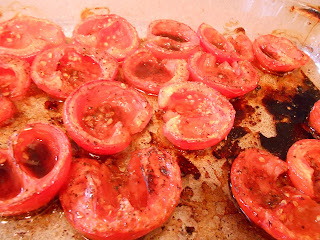 2.  In a dry frying pan, heat the coriander and cumin seeds over a moderate heat for 2 minutes, until the seeds start to pop.  Transfer them to a mortar and grind.

3.  Slice the onion and fry gently in a little oil.  Add the  garlic and ginger and fry for another 2 minutes, then add the ground cumin and coriander seeds, as well as the chili flakes and stir until everything is coated in the spices

4.  Add the tomatoes, stock and peeled sliced carrots.  Bring the soup to the boil and then cover, simmering and cooking for 30 minutes, until the carrots are cooked through

5.  Blend the soup until it's smooth and then return to the pan.  Gently heat through.

6.  Stir in the coconut milk, chopped fresh coriander and the juice of a lemon. 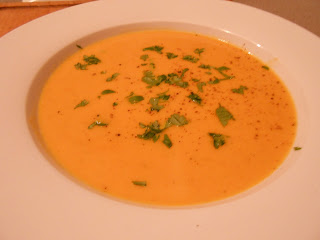 7.  Garnish with a few coriander leaves.  Serve and enjoy!

Posted by Dan at 17:02 No comments: Links to this post 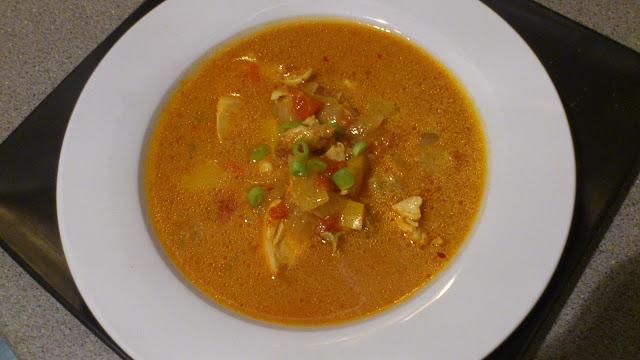 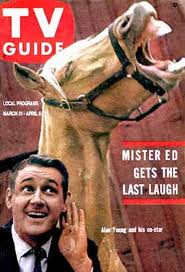 Here's a little known and rather sad fact.  Mr Ed, the talking horse (of course) was often said to have been made to talk by having peanut butter smeared on his teeth.  As the horse attempted to lick it off, it looked like his mouth was moving in speech.  The truth of the matter is that the horse had wires attached to his mouth, but the animal trainer thought that the peanut butter story was more charming, child-friendly and less likely to have those pesky animal rights busy-bodies interfering. Nowadays of course, Mr Ed would be made to talk via the wonders of computer animation (and probably voiced by Eddie Murphy - which would be a good thing...)

Another little known fact is that peanut is actually a bean.

A third (and final) fact is that peanut butter is my father's least liked food in the entire world.

At least two of these facts were brought to you with the aid of Wikipedia, see if you can guess which one wasn't...

The reason, of course, for these nut-based facts was that today's soup has peanut butter as an ingredient.  I love peanut butter on toast from my breakfast, but for some reason, I'd never gotten round to using it as an ingredient in cooking before.  I now feel that I have been remiss for all this time, as it added so much to this soup.  Indeed, if anyone has any other recipes which use peanut butter, feel free to point me in their direction in the comments section below!

On the question of crunchy vs smooth, however, I leave the choice entirely up to you!

Also, I used left-over chicken from a Sunday Roast (Again) but there's no reason on that you couldn't use chicken thighs or breast if you wanted.  This is a lovely, hearty and a little bit spicy soup 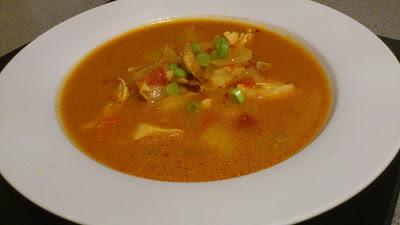 Method
1. Peel and de-seed the squash then cut into cubes.  Finely chop the onion and garlic.

2. Heat some olive oil in your soup pan, then cook the onions until the soften.  Add the garlic and grated ginger, then cook of 3 minutes over a low heat.

3.  Add the squash, chopped pepper chili flakes as curry powder and cook for a further 5 minutes.  Then add the tomatoes, stock and sesame oil.  Finally add the cooked chicken

4.  Bring the soup to the boil and then simmer, covered, for 20 minutes, before adjusting seasoning and serve.  Enjoy!