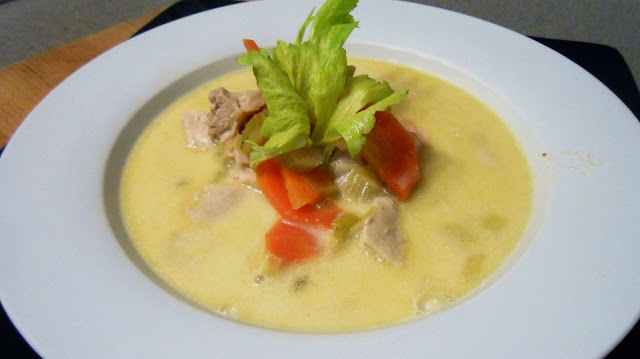 As promised last time, today we have the first of a few Belgian soup recipes, inspired by my recent visit to Brugge.  Sadly, as we were only there for one night, we didn't have time to sample a huge array of Belgian foodstuffs - Flemish Rabbit Stew, Frites and deep fried gravy were about the limit of what we had time for (and the obligatory waffles, chocolates and beers, of course...) but everywhere we went in the city (and we did go ALL over...) there were little restaurants selling wonderful food. 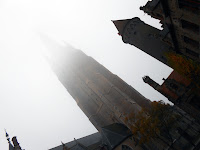 Other things we saw on menus all over were Moules (mussels) and Waterzooi.  Waterzooi is a stew or soup (Ahhh the age old question - when does something stop being a stew and start being a soup...) which can be made with chicken, mussels or other fish.

Like a lot of Belgian food, it's very rich and creamy and totally delicious. It's a sort of Flemish Cock-a-leekie, with a lot of recipes recommending using a whole chicken, although I have just stuck to using thighs which are both cheap and really tasty.  I tend to substitute them for breast in almost every recipe I cook, but you could use breast or chicken quarters in the soup.

If you have never been before, I highly reccomend a visit to Brugge - it's a beautiful place, and we had a brilliant tour round by a local gentleman who told us (amongst other things) that one ruler of the city was called Baldwin Iron Arm, who scared a bear to death*, and that they chopped off the head of a finance minister who raised taxes after promising not to (A strategy I think many people would be in favour of re-introducing...)

* This may not be entirely true - it was cold and I was tired so I may have mis-heard... 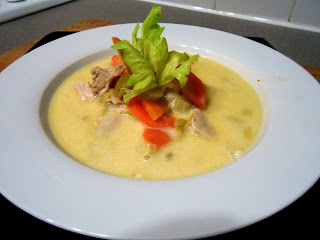 Method
1.  Peel and chop the onion, leek, celery and carrots.  Heat the butter in your soup pan and then gently sweat the vegetables for 5 minutes, until they start to soften

2. Add the stock, thyme, bay leaves and chicken thighs.  Bring the soup to a gentle simmer and then cook for 10-15 minutes, until the chicken poaches. Check that the chicken is cooked through and there is no pink left in the meat, then removed the chicken from the soup and set aside.  Let the soup cool for 10 minutes.

3.  Strip the meat from the bones and remove the skin, then cut the chicken into small pieces and return to the pan.

4.  In a bowl, mix the cream and egg yolks thoroughly, then put this in the soup pan over a gentle heat, stirring quickly, so that the mixture thickens the soup. Be careful that th egg and cream mixture doesn't cook too quickly or scramble! Taste and adjust seasoning, adding a pinch of freshly grated nutmeg, then serve with crusty white bread.  Enjoy!