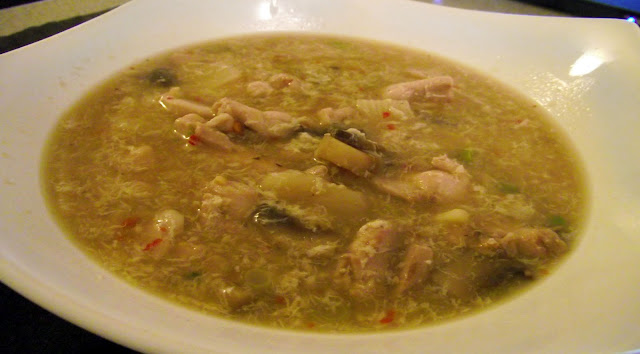 I first had Hot and Sour soup in a restaurant and was a bit wary, due to my dislike of Sweet and Sour Sauce served in Chinese Take-aways (you know, that radioactive red/orange stuff that they all serve.  Where does it come from anyway? )  But anyway, I was persuaded to try the Hot and Sour soup and needless to say, found it rather lovely.

This recipe seems to be an American version of a Szechan style soup, on account of the egg and cornflour in it, which makes it a lot thicker.  There are a number of variations, for instance Tofu makes a good chicken substitute, or you could go the other way entirely and add pig's blood to flavour it! Or at least use pork as the meat

Method
To the stock and water, add the mushrooms, bamboo shoots, ginger, chili flakes, garlic , lime leaves and soy sauce. Bring this to the boil then simmer

Mix the cornflour and vinegar in a separate bowl, then add this to the soup, boiling until the soup thickens and the chicken cooks - this should take about 3 minutes

Garnish with chopped spring onions and serve.
Posted by Dan at 14:53