I was initially a little dubious about this week's Weekly Bake Off recipe, perhaps because of the pineapples (I'm not sure why - I love pineapple!). For those who aren't big pineapple fans, I left mine as fairly big chunks, and still don't think I could taste them - I think they contribute moisture and sweetness, without being too acidic or noticeably pineappley.

Luckily I decided to stick with it and got everything together by Thursday evening when I had some nervous energy to burn off. Perhaps not the best of ideas as I managed to combine 2 different recipes by accident - I'd already made sure I had enough cherries for this recipe, and only needed to measure out the sultanas, which were bought on the way home. When weighing them out, I looked at the recipe on page 88 instead (Pineapple and sultana cake), and measured out far too many sultanas! Luckily the rest of the recipe is pretty much identical (except the Cherry Loaf has more cherries, so my version just has more fruit in it than either of Mary's). Having read some other comments about this recipe I wasn't fanatical about getting the pineapple dry before including it, and so my loaf turned out nice and moist.

I would definitely advise leaving this cake until the next day before slicing it - I couldn't resist and cut my first slice when it was still warm - it was delicious, but very crumbly, and benefits from sitting in the fridge for a few hours to firm up a bit. 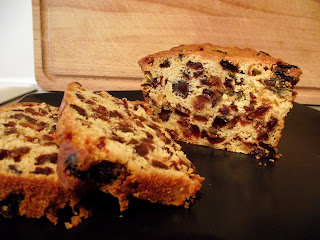 Mr Soup is a big fan of fruit cakes - our first Christmas together his mother told me it was now my responsibility to make him his Christmas cake - she used to make him his own to take home! He really enjoyed this cake, and will be asking for it in the future.
Posted by KasariW at 15:31