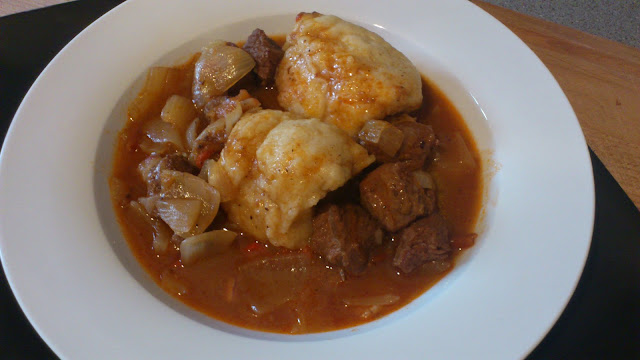 Wow, day 3 already, and the first day proper of the Olympics. And with the temperature outside actually summer-y, it's time for a stew, with dumplings... I really wasn't thinking when I planned these things was I? (Actually, I knew perfectly well what I was doing, because there is NEVER a wrong time to eat dumplings)

Today our journey round the world of Olympic cuisine brings us to Niger.  They have only won one medal in their Olympic history - a bronze in boxing at the 1972 Munich Olympics, so lets hope they have plenty of success this year, where they have 6 competitors in 5 sports (including boxing, judo, rowing and swimming) You can keep track of their progress here
Takusa (Mutton Stew) With Dumplings
Today's recipe is Takusa, or mutton stew with dumplings.  It's the first time I've ever cooked with mutton, and it did find a bit hard to get a hold of, but as ever, Leeds Market was my friend.  We also had some proper cinnamon, which I had been dying to use, and this dish gave me a perfect opportunity.  As always, I'm a sucker for a good stew and yes, I did make too many dumplings...

Method
1. Dissolve the yeast in 75ml warm water in a bowl and then mix in 15g of flour to make a smooth paste.  Cover the bowl and put in a warm place to prove for at least an hour.

2.  Add the rest of the flour, oil and flour, then add more water until the mixture turns into a firm dough.  Kneed for about 10 minutes, until the dough becomes smooth and elastic, then divide into balls about 4 cm across, place on a greased tray, cover and put in a warm place for another hour. 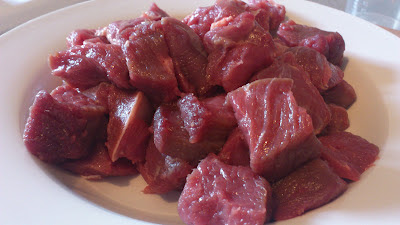 3. Heat some oil in a large pan and fry the mutton for 5 minutes, until it starts to brown. Then add the onions and fry for a further 5 minutes until they start to colour.

4. Add the cumin, cinnamon, aniseed and garlic, letting them cover the meat, and cook for 2 -3 minutes, then add the chopped tomatoes, dates and tomato puree, cooking for another 5 minutes 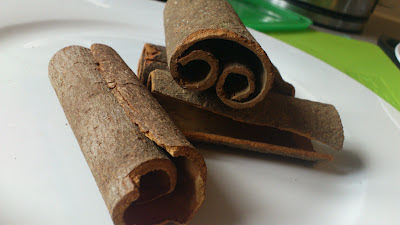 5.  Add 1l of water, the chilies and bay leaves, season and then bring to a simmer.  Cover and cook for 1 hour.

6.  Place the dumplings on the top of the stew and cook for another 30 minutes until the dumplings are cooked through and then server.  Enjoy!
Posted by Dan at 20:21