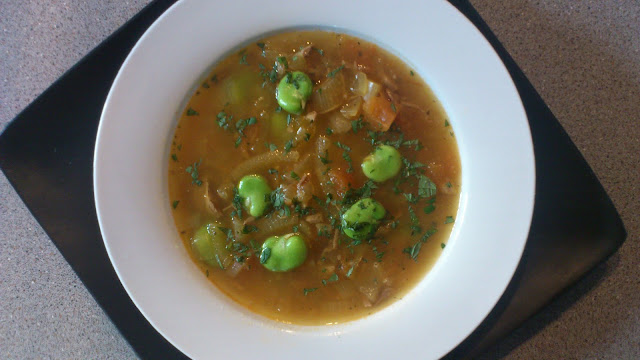 Turkmenistan was a bit of a challenge.  But then It's not called the Olympic Food CHALLENGE for nothing, I guess!  As with so many other places on the globe, country boundaries seem to be rather arbitary lines that don't represent the cultures that they are meant to define.  As such, whole areas claim very similar dishes as their own.  This seems to be very much the case with Turkmenistan which shares cusines with many of it's surrounding countries.

Is this a traditional Turkmenian dish?  I hope so, but if there happens to be any Turkmenians reading, you will let me know, won't you?

Anyway, this soup was rather amazing, light and summery, which was a surprise as cooking it involved no finesse, just boiling the hell out of some lamb until it surrendered...

2.  Soak the tomatoes in boiling water, then remove the skins, chop and de-seed.

3.  Add the chopped onions, tomatoes, mint, garlic, saffron and paprika to the pan and cook over a high heat for a further 30 minutes.

4.  Let the soup cool completely.  Remove the lamb chops and flake the mean from the bones and return it to the pan, along with the green beans. 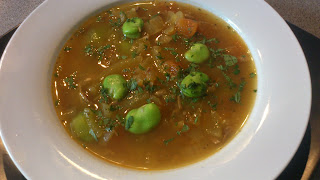 5.  Bring the soup back to the boil, simmer for another 10 minutes and then serve, garnished with fresh chopped mint.  Enjoy!
Posted by Dan at 20:23