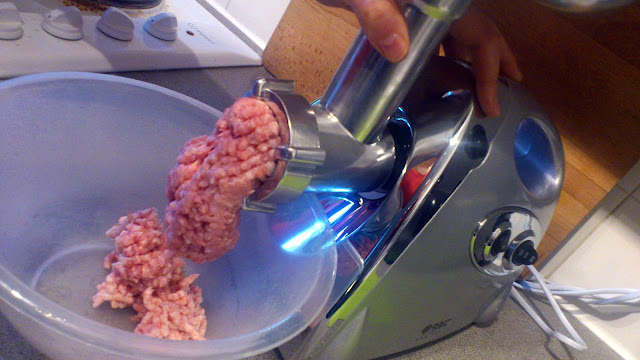 So it was my birthday at the weekend.  Whereas normal people get Xboxes or new shirts, Mrs Soup bought me a sausage making machine.  When I tore the wrapping paper off the box, my slightly girlish shrieks of joy probably woke the whole street up!  As well as the meat grinder itself, there were also a pack of sausage skins and a book of sausage recipes, methods and tips.

I've always had a bit of a love/hate relationship with the humble banger. I absolutely love good sausages, but in my student days I used to eat a lot of bad, cheap and nasty sausages, so I tend to think of greasy, nasty, 90% eyeball type sausages, instead of the juicy, meaty things that we all know and love.
As far as the cost of shop bought, good quality (80 or 90% meat) versus doing it yourself, how does it work out?  Well, once you have bought the machine (and as it was a present, I didn't ask how much it cost, so you may have to do that particular bit of research yourself, or ask Mrs Soup...) it's not too bad.  A lot of pork sausages in particular use belly or shoulder, which isn't too expensive.  This first batch made about 1kg of sausages for around £4.50. which is pretty good value for money.

As well as the value issue, there is also the benefit of knowing exactly what goes into your sausages - even some 90% meat sausages can contain various things like connective tissue (whatever that is... personally, I'm not all that bothered, as a big fan of offal to start with, I'm not too squeamish about what bits of an animal I eat)  As I used a whole cut of meat, this sort of thing isn't a problem.

*****History Factoid*****
In World War II, sausages weren't rationed, but there was no minimum meat content set by the government, which lead to the scarce meat being bulked out with bread, as well as shredded newspaper, sawdust and other unsavoury things. Offal was similarly 'off-ration.

The sausages were also very tasty, fun and pretty easy to make, and also, now I have the kit, my mind is racing with the possibilities for future fillings - black pudding, haggis, offal-based sausages are all within my grasp!  My first batch, however were some pork sausages with a little spiciness to add a kick... 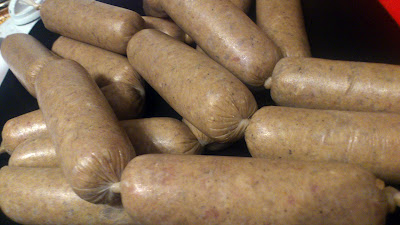 Method
1.  Cube the pork joint, and then pass through the mincer and into a bowl.  This was the first fun stage of the process - there is something primal about doing this - I imagined myself as both Sweeney Todd and a kid with a play-doh machine as it oozed out of the grinder! 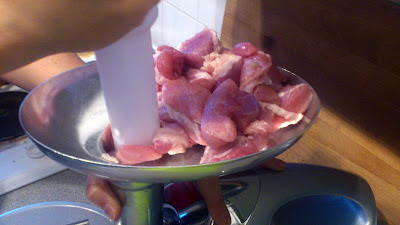 2. Mix in the breadcrumbs, and other dry ingredients. Finely chop the onion and mix this in as well.  Cover the bowl and leave to marinade overnight.

3.  Now comes the fun bit - putting the filling into the sausage casing.  The stuff I had was dry, but some skins need soaking first.  Another thing was, until this point, I hadn't realised there were different sizes of casings.  Mine didn't quite fit over the nozzle of the sausage machine...  However with some jiggery-pokery (and with the help of Mrs Soup) I managed to get the filling flowing into the casing.  And surprisingly, it didn't go all 'Generation Game' but was quite easy - although I reckon it's a two-man job, at least until I'm a bit more practised at it.

4.  Twist the sausage into links and then put in the fridge for an hour or two before cooking (I froze some at this point as we did make 1kg) 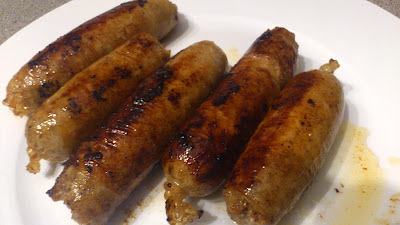 5.  Fry and eat! They smelled so much more meaty and delicious than any shop-bought sausages I have ever encountered!  I served mine with the traditional mash and thick, rich and tasty onion gravy.... Enjoy!