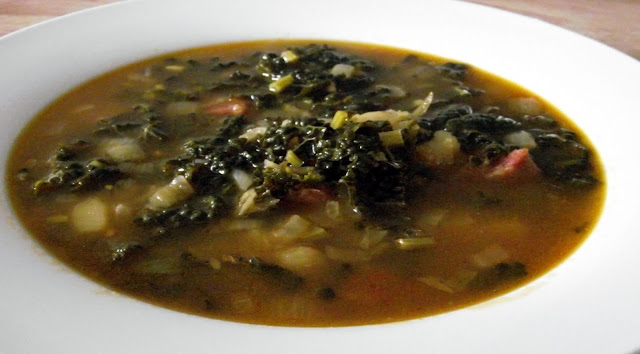 For an experiment, I randomly bought some vegetables and then had a look around for a soup recipe that used them.  The vegetable I bought was some lovely dark kale, which I decided to make into the Portugese soup called Caldo Verde.  I had some chorizo sausage that Mrs Soup brought back from a work trip to Belgium of all places and some stock that I made from last Sunday's roast chicken left-overs, so this soup was rather economical, and also very tasty


Method
1. In a large thick bottomed frying pan, sweat the onions and garlic in a little olive oil until they start to go translucent.  Add the chorizo (dice it first) and then sweat for a little bit, so the onions become coloured with the paprika from the sausage, then add the diced potatoes, cook for a little bit longer on a low heat, then transfer to a large soup pan

2. Add the stock, bring to a rolling boil and then simmer for 15-20 minutes, or until the potatoes are soft and just on the verge of starting to break up.  This means that they are starting to take on the flavours of the chorizo and the stock.

3. Finely shred the kale, then in another pan, blanche the leaves, to remove any bitterness, then drain and add to the soup, season to taste and then serve, with a swirl of olive oil and a sprinkling of paprika.

4. You could also add some pulses (especially white beans like cannelini beans) to the soup if you like.  Enjoy!
Posted by Dan at 16:24