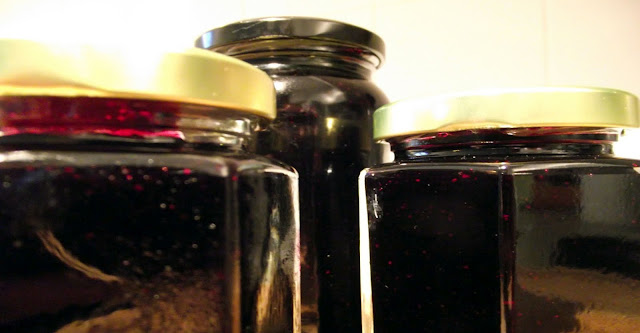 Following on from our foraging adventures, we decided to make some bilberry and apple jam.  Sadly the apples weren't home grown or picked wild, but hey, you can't have everything, can you?

500g of bilberries took two people about an hour to pick, and gave us a very pleasant afternoon out in the countryside.  Also, for those of you not familiar with these berries, there is a nice article about them here

While bilberries aren't that popular or well a known fruit today, bilberry jam was a staple of diets in the 40's and 50's.  Indeed, the story about carrots giving RAF pilots enhanced night vision was also attributed to Bilberry jam during the second world war.  Whilst we now know that was a misleading story used to cover up the introduction of radar, it is now known that Bilberries do contain chemicals which are good for your eyes, so it turns out there was some truth to the stories!

Method
Wash the bilberries and pick out any bits of leaves and twigs and put them in a large, heavy-bottomed pan, then squash them up a bit with the back of a spoon.  Next add the sugar and leave to stand for 20 minutes, so the juices from the berries and the sugar have a chance to mix.  This will also pull the juices out of the berries and give you a wonderful red and fruity looking mixture

Peel, core and finely chop the apples and add them to the mixture.  Tart apples like cooking apples work really well as the sugar will add all the sweetness that you want.

Once the mixture has been standing for 20-30 minutes, put it on the hob and heat gently to cook the apple.  Don't heat it too much at this stage, or boil the mixture, or it could burn. Ideally you want the finely chopped apple pieces to begin to break up and start to dissolve into the mixture. This could take a while, so keep an eye on it and keep stirring it every now and then

Once the apple is starting to break up, then turn the heat up and bring the mixture to the boil, and boil hard until the jam starts to set. 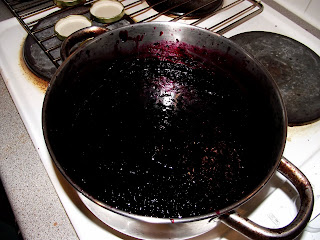 Meanwhile, you need to sterilize some jars.  Now in the interests of saving the planet, I always recycle jars (unless you are giving jam as a present, say at Christmas - and I will be giving jam at Christmas, and then I think it's about acceptable to buy fresh jars - as long as you make the recipient of the jam promise to recycle or re-use the jam).

To make sure the jars are sterile, give them a good wash and then simply pop them in the oven for a bit to kill any lurking bacteria.  Alternatively, use sterilizing solution.  It's a very good idea to do this as it stops the jam from going mouldy when you store it for use later


To test if the jam is near setting, put a small bit of jam on a spoon and place it on an ice cube then leave it to cool down.  Once its cool, push it with your finger and if it crinkles and keeps its shape, then it is just about right.  When doing this, make sure the jam has cooled enough to touch or else you will burn your fingers!

Once the jam has reached this stage, it's ready to be put into the jars, and have the lids put on.  Be very careful at this stage, it the jam is extremely hot!  Let the jars cool overnight, then store in a cool, dark place until needed.  And by needed I mean spread on toast for breakfast, spooned over ice-cream, put in pies and tarts and perhaps just eaten off the spoon in a self-indulgent moment when no-one is looking
Posted by Dan at 20:44