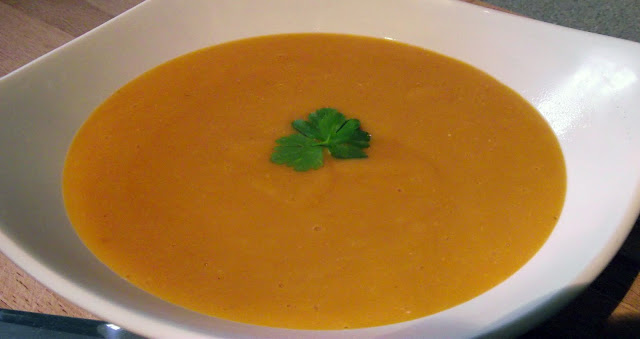 Ahh the lentil.  Butt of so many jokes when it comes to vegetarian cooking, but invaluable in making so many delicious soups, casseroles and even pate. For years, all I could think about when I heard about anyone cooking with lentils was Neil from The Young Ones.  Indeed, I suspect that he did more to set back the cause of the humble pulse, and probably vegetarians as a whole, than anything else I can think of.

But now I'm a bit addicted to them, which is something I never thought I'd say, what with being a ravenous carnivore and all (like a T-Rex from Jurassic Park, but less likely to eat Bob Peck - he's all gristle anyway, I've heard...) and I use them in all sorts of things, from being the basis of veggie chillies, lasagnes and Shepards pies (is it still a Shepard's Pie if there is no actual Shepard, umm, meat in it?  Answers in the comments section please...)

This recipe is a little bit of a different take on the humble lentil soup, because we all like tyhings that are a bit different (and by different, I mean that this soup has a bit of vinegar to give it some zip) 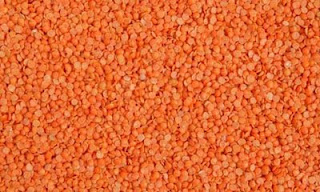 This soup recipe is so simple, yet so filling, and shows how you can make any soup that bit thicker and more nourishing by the simple addition of lentils. And it's also wholesome, hearty and, as my Mother would say 'stick-to-your-ribs' food, which is great for these long, dark and miserable winter nights. Which is odd, as it's a Greek recipe if I'm not mistaken, where I assume that the nights are never cold and miserable, but I also assume that giant bronze statues stalk the land claiming sacrifices for the Gods, but that might just be Jason and The Argonauts, so you will have to excuse the mistake...

Method
1. Finely dice the potato, carrot, celery and onion.  Heat some olive oil in a large pan, then add the chopped vegetables and the garlic.  Cook the vegetables for about 5 minutes over a medium heat, until they start to become soft.  Make sure to stir constantly or the vegetables can stick, and don't let them become too coloured or brown.

2. Add the stock, lentils, tomato puree, bay leaf and oregano then simmer the mixture for at least an hour until the lentils have cooked through and gone soft. Once this has happened, and the lentils are starting to fall apart in the soup, take the pan off the heat and allow the soup to cool down.

3. Transfer the soup to a food mixer and blend until smooth. Season to taste and add the red wine vinegar, then return the pan to the hob to heat it through, then serve with a swirl of olive oil.

4. Flat breads make an excellent accompaniment to this soup, which is so easy to make but so tasty.  Enjoy!