Apparently, the inability to bake runs in my family, but even I can get this one right.  Today is the anniversary of The Battle of Trafalgar, and it's also National Baking Week, so I thought why not kill two birds with one stone and make some hard tack or Ship's Biscuits to take to a party being thrown in Lord Nelson's honour tonight. 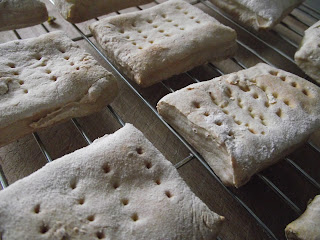 Ships biscuits are just about indestructible, and this recipe is a lot more palatable than the stuff that would have been eaten in Nelson's time, where the biscuits were made with ground up bone meal, or pea flour.  They also became infested with weevils on long voyages, and it was customary to tap them on the table before eating them to give said parasites a sporting chance to escape. Although the weevils probably gave more nutrition than these biscuits.

When I said I was making them, someone pointed out that they are the first thing you get taught how to make in infant school cookery classes, so maybe I will move up to jam tarts next.  These biscuits can be served with bone soup (I might make this one day - vegetables, stock, bones and lots of vinegar to dissolve said bones - tasty eh?) 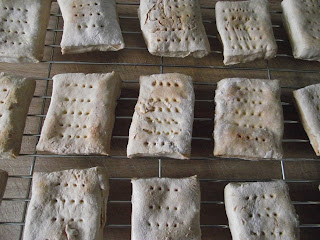 Method
Make a dough with the ingredients - add the water carefully because you don't want it to become too wet, then roll it out into a sheet of less than 1cm, and cut the dough into squares or about 6 x 6cm.  Decorate as you want - I pricked mine on both sides with a fork.

Heat the oven to 200ºc.  Put the biscuits on a baking tray and cook for 30 minutes, then flip them over and cook for another 30 minutes.  The biscuits should just be starting to go a golden colour.  Leave them to cool on a wire rack and then you can try to eat them.  As they cool they will take on the consistency of a freshly fired brick, so watch you don't crack your teeth on them.  Best served with grog!  Now you can feel like a proper pirate!

As for me, I will be celebrating the defeat of Villneuve and the hated French (and Spanish) with roast Beef, Port and fireworks!