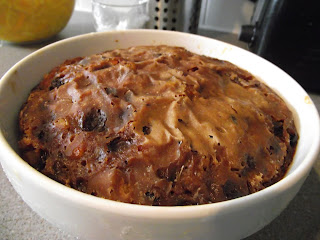 Here is my super-easy Christmas pudding recipe. For some reason people assume that Christmas pudding is difficult to make and takes ages - the prep time on this is only about 10 minutes (with 6 hours cooking time) - once you've seen how easy it is I doubt you'll go back to store-bought!

This is an old family recipe - as long as I can remember this was presented at Christmas time, with flaming brandy (it's the only way!) and cold brandy butter to accompany. When I was much younger, there was always a silver coin in my slice - I suspect, with hindsight, that the silver coin was slipped in after dishing, but as a child it all added to the magic of Christmas!

(If you do decide to put coins into your pudding, pop them in a pot of boiling water and boil them for about 10 minutes first - also use largish coins - 50p pieces would be best - and warn everyone that they are in there! I would probably use a knife to make insertions into the cooked pudding and insert them after cooking to get an even distribution.)

I made this pudding as my contribution to my first Christmas meal with Mr Soup's family - I don't know who was most nervous about it (me, him or his mother!), and we're fairly sure there was a store-bought backup - but it was a resounding success, and even had people coming back for seconds (after the spread on offer that was quite a feat!) There will be a repeat performance this year by popular request.

I normally make this a month or two in advance, and do a lot of feeding with the remaining brandy, but it's quite possible to serve immediately after steaming it.

The recipe is from a Victorian Cookery and Housekeeping book, and the resulting pudding is considerably lighter than we are used to nowadays - don't be worried - it still tastes amazing. There is also no added sugar - all the sweetness is from the fruit. This recipe is scaled down from the original - which made 3 large puddings, and used every mixing bowl I had!) These quantities are just right for one large pudding.

Mix together the dried fruit, suet, bread crumbs, flour and spice. In a separate bowl beat the eggs, milk and brandy together. Pour the wet ingredients into the fruit mix, mix well and put the mix into your pudding bowl. Tie a cloth, or greaseproof paper over the top, and boil/simmer with the lid on for about 6 hours - I do this overnight on the low setting of my slow cooker. The pudding can be turned out and served immediately, or stored, with a bit of brandy poured over it every week or two till Christmas! If you store the pudding, all that's needed on the day is to boil it again (to heat it through) for half an hour to an hour.
Posted by KasariW at 12:28