Mrs Soup is a bit of a Japan-o-phile, so I turned over responsibility to her for this dish.  I was good and didn't even hang round in the kitchen, fussing and 'helping' like I often do when someone else is cooking for me.  What I got in return was a rather magnificent feast.

First a bit about Japan, which, it turns out has never been attacked by Godzilla.

1. Japan has the worlds largest population of robots! Over 800,000 of them live and work in the country, although none of them play for the national football team (as far as I know)
2. Japan has the world's oldest national anthem - Kimigayo - which dates back to 1880, but is based on a waka poem from the Heian period (794–1185) but it doesn't feature any lines about pouring gifts on people, like the British nation anthem does.  (This is why it's considered bad form to give the Queen a present of soup)
3. My Neighbour Totoro, a Japanese animated film directed by Hayao Miyazake is THE BEST FILM EVER MADE 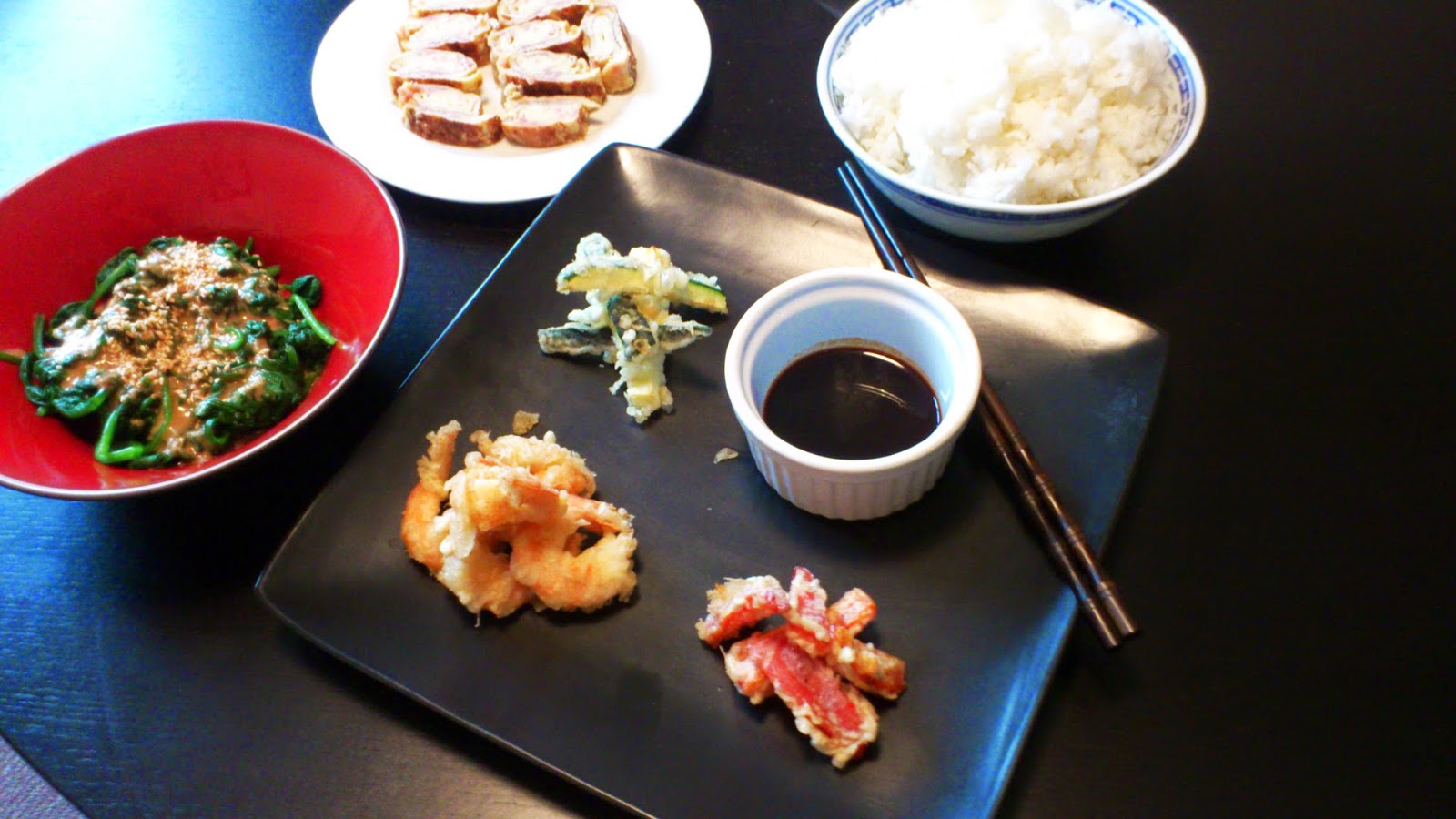 So, anyway - now that you know more about Japan then 97% of the people who actually live there, on with the food. Rather than cook a single meal, Mrs Soup opted for a number of small dishes served at the same time.

All the recipes came from a book called Hashi by Reiko Hashimoto, which is a brilliant introduction to Japanese cuisine, I can't recommend it enough and I'm totally hooked on it. 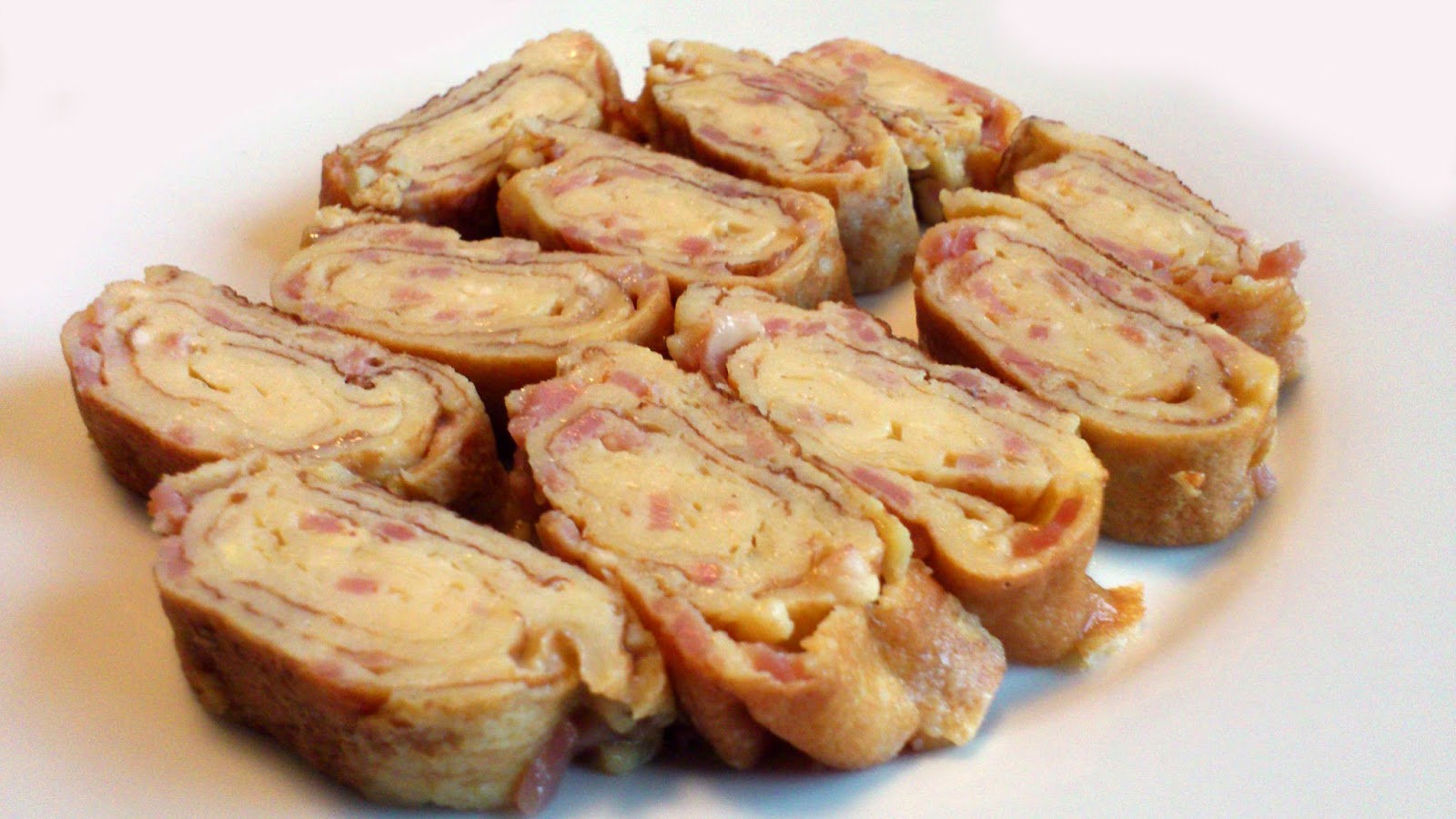 Amongst the dishes were Tamago-yaki, which are slices of sweet omelettes with ham, sweetened with sugar and mirin, then sliced thinly and served cold.  Like most Japanese dishes, everything is served sliced on the plate to make them easier to eat with chopsticks (although I opted for a knife and fork as I lack the co-ordination for chopsticks, or walking in a straight line for more than 4 meters)

Next up was Spinach with Gomadare Sesame Sauce, which was blanched spinach leaves again served cold accompanied with a sauce made of tahini, caster sugar, mirin and sesame seeds. This sauce definitely had umami coming out the wazoo, so to speak.  This is a brilliant way to make spinach a tasty dish without actually doing much to it.

And finally (unless you count the aubergine and miso dish which was somehow left in the oven and burnt to a rather exciting purple crisp, but we wont mention that...) we had prawn and vegetable tempura with ponzu sauce.  2 things I learned watching Mr Soup prepare this dish was that
1) Chopsticks are a brilliant utensils to aid in the deep frying process, great for making sure the food doesn't stick together and perfect for grabbing things from the hot oil

2) Ponzu is a sauce, not an elaborate insurance scam, made with lime juice, soy and dashi.

Also, being a Northerner experiencing oriental food, I was excited to find that tempura comes with scraps like you used to get from the chippy.   Well, maybe it isn't actually meant to be part of the dish in the strictest terms, but the light golden and crunchy batter was so amazing that I couldn't help just eat it on its own....