So it's the new year, and we are all making lots of new year's resolutions (and yes, I know this post is two weeks late, but one of my resolutions is to procrastinate...) Here at Soup Tuesday HQ, we decided to blog what we eat the rest of the week.  Obviously, Tuesdays are soups, and always will be, but there are at least 6 other days in the week to account for.  Because just writing what we cook and eat would be a bit boring, we decided to set ourselves a few challenges, which are as follows

1.  Mrs Soup and I both pick a cookbook from our groaning shelves, give them to each other and then we each pick a recipe from the books we have chosen for each other.  The purpose of this is twofold - one is to get out of the habit of always cooking the same 10 dishes over and over again, and also to use some of the cookbooks that we have that have probably been used only once or twice.

2. One meal must be based around some ingredient that we have either not tried before, or that is kicking around in the cupboard that we have bought but have never gotten round to eating.  Again, this gets us out of out comfort zone (plus it means I can try lots of lovely offal dishes) and also, because Mrs Soup is in the Foodie Pen Pals scheme, we get sent lots of interesting things through the post, and this gives us an opportunity to try them out in new ways

3.  One meal, at least, must be a veggie meal.  We get a wonderful vegetable box every week, and this gives us the excuse to use the oddments that are left over from the box in exciting ways.

So with those rules in mind, here's what we ate last week!

This came from a recipe book by James Martin called Great Winter Recipes.  I remembered whilst making it, that I hate working with pastry, even ready made, which is why I write a blog about soup and not my other food love, pies.  There was much effing and jeffing, but the end result was rather nice, if a little light

A water damaged Delia Smith cookbook yielded the recipes for these two amazing dishes, and Mrs Soup earned extra brownie points for the brandy snap baskets that accompanied the ginger ice cream.  This also gave us the chance to use the ice cream maker that was a Christmas present that we were determined not to just let sit on the shelf.  As we accumulate new kitchen gadgets with alarming speed, it becomes more of a challenge to use them... 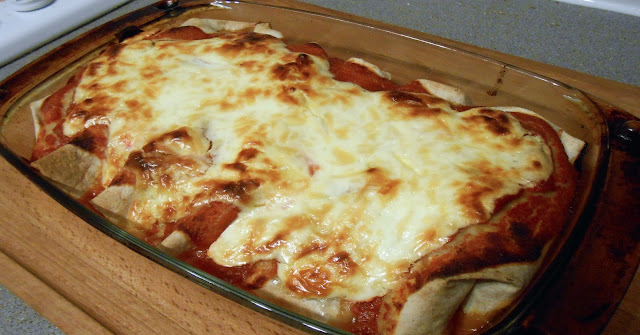 A quick and easy recipe that I pretty much made up on the fly, involving the same veggie chili recipe that I've been cooking since I was a student (i.e. everything in the pan with spices and beans)

I have only just gotten into making frittatas, but they are amazing!  You can pretty much put anything in them!  This had some smoked sausage that was left-over from completely failing to make soup earlier in the week, and some beetroot that had turned up in the veg box, but wasn't destined for chocolate cake...

The final dish of the week was a 'throw everything in the pot' curry, which would probably make expert curry  chefs weep, but was rather amazing - even if I did mistake the cauliflower for a cabbage at one stage...
Posted by Dan at 16:51