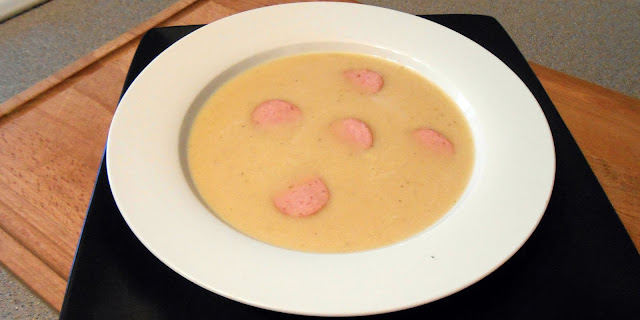 This is the second recipe suggested by the lovely people who have been sending me postcards via the rather wonderful Post Crossing website.  Today's soup is a Czech recipe and was suggested by Anna (Who also sent me a postcard with a picture of the Bohemian forest on it, but not a rhapsody to be seen, I'm afraid...)

One problem I encountered when putting this recipe together was that during the research phase - it's like NASA round here when I get on a soup tip - that most of the websites I looked at for inspiration were in Czech.  Now, in the 21st Century, you wouldn't think that this would be a problem.  Except that Google Translate, whilst being pretty amazing, can sometimes throw up some weird things.  For instance, does adding basil to a recipe reduce flatulence?  Or did the original Czech mean something entirely different.  And what exactly is White Bone Stock?  (I suspect this may be a real thing, as I've come across recipes for Bone Soup before)

So after some struggling, I came up with this approximation of Czech Bean Soup, with added smoked sausage that I initially bought for another soup, the making of which was thwarted by the fact Morrisons butchery department has stopped stocking pig's trotters (Can the fact that Morrisons plc just published lower than expected sales figures be in some way related to the vanishing pigs feet?)

However, fear not, as a trip to Leeds Market will hopefully furnish me with the required bits for next week.  In the meantime, enjoy this simple but delicious soup, which is probably great for all those of you on a post xmas diet (especially if you leave out the sour cream, or substitute some natural yogurt instead)

2.  Heat some olive oil in a pan.  Add the vegetables and cook gently for 5-7 minutes, until they start to go soft.

3. Add the stock.  Rinse the beans and add them too, as well as the bay leaf and sage.  Bring the soup to the boil and then simmer for 30 minutes, until the beans have gone soft.  Take the pan off the heat and leave to cool for 15 minutes.

4.  Blend the soup until smooth, then return to the pan.  Adjust seasoning and then reheat gently.  Stir in the sour cream at this point, but don't let the soup boil.

5.  Grill or fry some thin slices of smoked sausage.  Pour the soup into warm bowls and then garnish with the slices of sausage.  Serve with crusty bread.  Enjoy!
Posted by Dan at 15:40