So it's the new year, and as I write this, it's raining cats and dogs, and already most of those good intentions that I had on New Year's eve are starting to evaporate.  One that hasn't however, is the desire to keep up to date on the blogging front, as I slipped a bit towards the end of last year, although the delightful Mrs Soup has been taking up some of the slack with her wonderful baking - of which I hope we shall be seeing more this year.

So to this week's soup recipe (as it is Tuesday, and this blog is still called Soup Tuesday, and I don't want to let you down...)

I've always been a B-Movie geek.  One of my earliest memories is watching the 1953 version of War of the Worlds and being terrified of the Martian creature, and yes, I did hide behind the sofa, although never at Dr Who - I never found that too scary (Peter Davison was my Doctor, although on reflection, I always found Adric a bit un-nerving, and let's not mention Turlough...)

King amongst the B-Movie makers was Ray Harryhausen - you will know him from the fighting skeletons of Jason and The Argonauts and the (original and good) Clash of the Titans.  But my all-time favourite of his films was It Came From Beneath the Sea, in which a giant Octopus, mutated to gigantic proportions by the evils of Atomic Power! attacks San Francisco. (Also, I got this film on DVD for christmas, courtesy of Mrs Soup)


Ever since then, I have been repulsed and fascinated in equal measures by the Octopus.  And so, by way of revenge for countless childhood nightmares, I give you - Spicy Octopus Soup!

Octopus should either be cooked very quickly (fried) or long and low, like in this unusual but tasty soup.  I got mine from the local supermarket, where they were only too happy to clean and dress it, so all I had to do was cut it into chunks 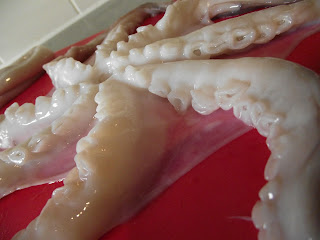 Finely chop the onion.  Heat some oil in a large, heavy pan.  Gently fry the onions until they start to colour.  Next, add the chopped carrot, celery and minced garlic and cook over a low heat for 10-15 minutes, until all the vegetables have softened.

Add the tomato paste an cook for another 5 minutes, then add seasoning to taste.

Cut the octopus into 3cm chunks, and add this to the pan, with the stock and spices, bring the pan to the boil and then simmer for 1 and a half hours, until the octopus is nice and tender.  Add the Bulgar wheat and fresh coriander, check the seasoning again and cook for another 20 minutes then serve.  Enjoy!