Well, my birthday is still a couple of weeks off, but I had no objections to the choice of cake this week for the Weekly-Bake-Off. In my opinion, any recipe that has a 300(ish) grams of chocolate, 6 eggs, sugar, almonds and coffee, can't go wrong!

I used a mix of dark and milk chocolate to get an average cocoa solid percentage of about 42%. Having watched Heston Blumenthal's chocolate masterclass episode a couple of weeks ago, I treated my chocolate gently. I was a bit concerned about the recipe's instructions to add the coffee directly to the melted chocolate (Heston's demonstration of how chocolate seizes when water is added to it had me panicking a bit!), so I instead added it to the choclate/almond/eggy mixture as I folded that together. I didn't make any other changes to the recipe, and baked it for exactly 50 minutes, with only a quick peek at about 45 minutes.

The top seemed a bit crispy and had risen slightly lopsided, so I trimmed it, flipped it upside down and iced it that way up.

I only had salted butter for the icing, but that turned out to be A Very Good Thing (again, Mr Blumenthal had mentioned that salt accentuates the taste of chocolate), and the icing has a lovely, super chocolately taste, as well as being beautifully glossy. I'd decided to use some fresh cherries to decorate the cake, and dipped these in the melted chocolate (before the butter was added) and set them onto baking paper to set slightly. Once the chocolate icing was poured onto the cake, I placed the cherries - I'm very pleased with the way they look like they're half immersed in a chocolate sea!

The cake tastes wonderful, has a good, dense texture and is very indulgent. I'll be making this again when something special is called for. This first picture was taken with my phone's camera. 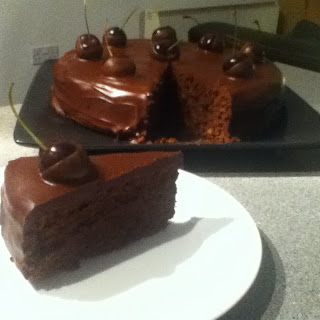 A better resolution one was taken once the camera's batteries were charged, but by that point quite a bit of the cake was missing! I stored the cake in the fridge, but would suggest before serving taking it out and letting it come to room temperature as the texture of the icing is much nicer. 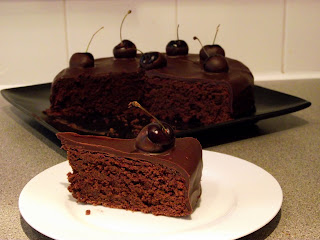