I recently discovered a fantastic online community challenge - the Weekly Bake Off. Th 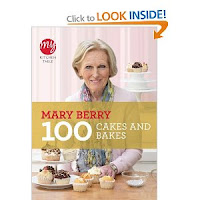 is is a weekly challenge to bake a recipe (announced on a Monday) from Mary Berry's 100 Cakes and Bakes. Unfortunately I found out about it halfway through December, during the break for the Christmas holidays, so had to wait till the New Year to participate. (Though after receiving the book for Christmas I couldn't wait, and did make one recipe from a previous Bake-Off - Meringue roulade.)

This week's recipe was Devil's Food Cake. Since it was my first bake, I decided to stick (almost) exactly to the recipe. The cake part was fairly straightforward - when mixing the butter/sugar mix with the dry and wet ingredients I was a bit worried that the texture was quite runny (started off almost moussey). I added a heaped spoonful of coffee to the cocoa but kept the liquid volume the same - next time I'll add more as I could taste coffee in the batter, but not really in the final cake. I did need the full 45 minutes to cook them, and the texture of the sponges when they came out of the oven seemed very light and fluffy. My cake tins are closer to 25cm than 20cm, so they were a little thin.

The icing was the most exciting bit of this bake - I've never made American frosting before (in fact I didn't know it existed - the recipe does remind me of Italian meringue - anyone know if there is a difference?) Despite that I did alter the recipe slightly - added a pinch of cream of tartar, and a little vanilla extract the sugar syrup. This gave me a chance to try out my new sugar thermometer (I was really spoilt this Christmas!), and I'm pleased to report it went fairly smoothly. Mr Soup helped pouring in the syrup, and we both ended up splattered with sticky meringue (so much so that we stuck together after a hug!). The instructions said to ice the cake quickly as the mixture sets quite fast, but I think I would have had a better result waiting for a little while for it to start getting a little stickier. (or perhaps it was because I hadn't got the mix stiff enough?)
So here is the final product : 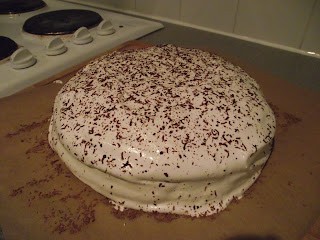 As you can see, the icing was a bit runny and slid a bit - not too much, there was still a good thick layer on top, but nothing like the picture in the book! It set crispy on the outside, but stayed gooey underneath, so after slicing it the next day, it oozed down even more (though not as much as it looks in the picture - the top layer of cake is the same thickness as the bottom). I think the mixture probably needed to be whipped even stiffer, or perhaps the sugar syrup needed to be slightly hotter. 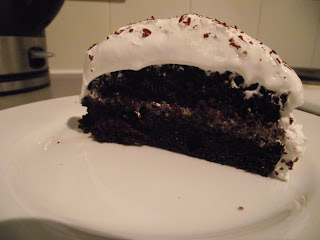 Final verdict on taste - the icing was a bit too sweet for my taste, but had a lovely sticky marshmallowy feel. The cake itself was gorgeous - lovely and light and chocolatey. I'll make this again, but will probably use a different icing - probably a coffee flavoured one!
Posted by KasariW at 12:38