I know it's a little bit late (or early) in the year to be talking about Halloween, but when I was younger (or when ah' were a' lad) a Halloween trick-or-treating trip was not lit by a pumpkin carved with a ghoulish visage - I don't think I ever even saw a pumpkin until about 10 years ago (so the classic Charlie Brown specials on TV made absolutely no sense as well..)

Instead of a pumpkin, we carried turnip lanterns, which were made of... ummm... swede, lit from inside with a candle, and with a face crudely carved into it.  And it's very hard to carve a swede.  And now the smell of burning swede is hugely evocative of knocking on old ladies doors and being given Blackjacks, Wam bars, Yorkshire mixture and Palma violets.  Not that burning swede is a common smell round our way. 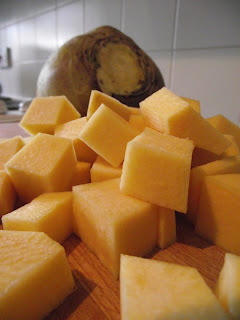 Swede seemed to feature a lot in my childhood diet - usually mashed with carrots, and I think it's given a bad reputation as being a bit useless.  I think it has a flavour at least as nice as sweet potato, and really should be given some more love.  I also don't think it helps that our colonial cousins call it 'rutabaga' which sounds like it should be a character in an eastern European folk tale.  Possibly about a witch who turns unwary children into root vegetables.

So without further ado, Swede soup...

Method
Heat the over to 180ºc.  Put the cubed swede in a roasting dish and drizzle with some oil, season and then roast for 30-40 minutes, until the swede starts to turn a lovely golden colour. 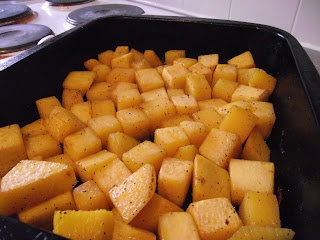 In your soup pan, heat some more oil and then cook the onion, celery and garlic for 4-6 minutes, until it starts to soften and colour, then add the stock and the roasted swede.  Bring the soup to the boil and then simmer for 40-45 minutes, until the swede is nice and soft.

Blend the soup until it is smooth - pass it through a sieve to get rid of any lumps and give it a more creamy texture if you don't like your soups too thick.  You can also add a bit more stock or water to give it a better consistency if you want.  I prefer my soups to have a more liquid consistency and not resemble semolina from the school canteen (do kids today still eat semolina at school?  And more importantly, do they still stir a spoonful of jam into it and make it turn bright pink before eating it?)

Return the blended soup o the pan, reheat and add a knob of butter and stir in the cream.  Check the seasoning and then serve. 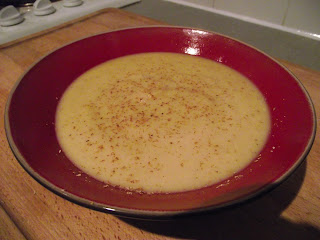 Grate some nutmeg over the top and serve with hearty fresh bread for a lovely winter soup! Enjoy!
Posted by Dan at 11:54