So it's been a while - a whole week in fact, since my last post.  I do hope you weren't worried, all that happened was that I became a year older (more on that in my next post).  Anyway, I do apologize, and here is the third installment in Dutch Week, although it's been more like Dutch Fortnight...

It seems to me that Dutch cuisine is a lot like English food, a mish-mash of foods from all over the world.  After all, it's been said before that what could be more English than a kebab after a night out, or going out with a group of friends for a curry?  Umm, well... (Also, remind me some time to tell you about the best curry house I ever visited, regularly at 2a.m when I was a student in Bradford - not sure it exists any more, but it was wonderful in 1992!)

But here is Bapao - which some of you may have heard of as Ba Pao, a Chinese or Indonesian recipe for steamed meat filled buns, and they reminded me of Dim-sum and my valiant efforts to make chop-sticks work (they are witchcraft, aren't they?) and were apparently imported into Holland via it's ports, much like the mix of cuisines we count as adopted native in the UK.  You can also play with the fillings, to include chicken, pork or even tofu (if you are a vegetarian, or as my Mum would say Funny Eater...)

This recipe makes about 10 buns

First off, you need to make the filling for the buns.  Fry off the beef until it is browned, then add the 5 spice mix, soy sauce sugar and garlic, cook for a bit longer and the season to taste and set aside. 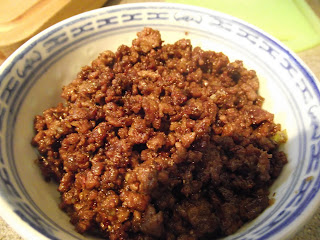 Next, make a dough with the flour, milk and sugar, kneeding well and then splitting it into 75g balls.  The roll them flat but not too thin, before placing about 1tsp of the beef mixture into the middle, then wrap the dough around it, until it is sealed. 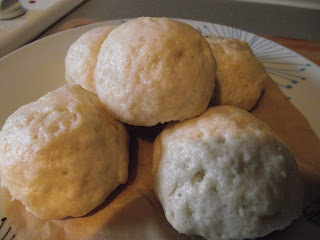 Then we are ready to cook the buns.  Steam them for about 15 minutes, trying to keep the seam in the buns face down so they don't split. And they are ready to serve.  Some sweet chilli sauce or Soy sauce makes a good dip for the buns.  Enjoy!