So Team Tuesday (Team Soup doesn't sound quite as catchy, does it?) were out in the wilds of our local canal path, looking for berries and getting dirty looks from cyclists, and knowing looks form old ladies out for a Sunday Afternoon stroll (they know exactly what is edible, and also how to make the best pies and jams - ask one and see) and we found many, many Elderberry trees, with branches drooping under the weight of huge bunches of berries, all ripe and full of flavour. 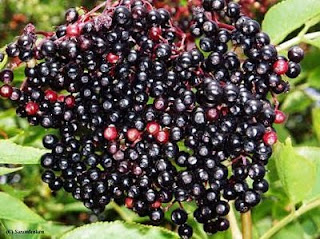 In a flash, we had filled a plastic bag with bunches and headed home to prepare them.  As the main purpose of collecting Elderberries was to produce wine, the majority weren't too well cleaned and prepared - simply running a fork through the bunches to liberate the berries (and a few creepy-crawlies too) was enough for them, before they were put in a bucket with all manner of other things that start the alchemical processes involved in turning fruit into wine (a process I don't even begin to understand - I'll leave that to those members of Team Tuesday who have a PhD)

Having some berries left, I thought that I would whip up some sort of pudding, but I wanted to try something a bit different from the usual crumbles and pies, and then I found this interesting recipe which is a sort of a cross between a bread and butter pudding and a summer pudding.  It's a nice way to use up any left over fruit that you have lying around, and a nice way to celebrate the few remaining days of summer we have left before the nights draw in and I just want to hibernate (But at least I will have bottles of Elderberry wine to keep me company)


Method
Make sure that the elderberries are clean and free of stalks, peel and slice the pears and pit the plums, quartering them.

In a large pan, heat the butter and then cook the fruit over a low heat for 5 minutes.  In a cup., mix the flour with some of the milk to make a paste, then add this to the fruit.

Next add the rest of the milk to the pan.  Cut the bread into small pieces and then add this to the pan as well, cooking until the plums are soft.

Season to taste with sugar, cinnamon and lemon juice, then serve and enjoy!
Posted by Dan at 09:48