I have a rather unusual surname, there's no avoiding it.  Whether it's people asking me how to spell it, random strangers asking me about my family tree or trying to avoid confusion in the doctor's surgery, I can go nowhere without taking my name along with me.  Oh, yes, I'm not sure whether you spotted it, but my surname is dutch.

However, I have never even set foot in Holland.  My name came to this country along with my Grandfather shortly after the second world war.  A glassblower by trade, he eventually settled in England, working at a light bulb factory where he met my Grandmother and the rest is, as they often say, history.

On a strange and un-bidden whim, mainly due to the fact that someone sent me a link to this recipe, I decided to cook a few dutch dishes.  I apologize if any Netherlanders should come across these recipes and find them wholly inaccurate.  I'm doing the best I can.

Anyway, the first dish I decided to cook (the one I was emailed) is Bitterballen, which is often translated to Deep Fried Gravy - apparently a bar snack in Holland, but how could I resist a dish like this - gravy is my one true love, easily as important as the meat it is accompanying in my estimation, and when preparing a Sunday roast, I will devote as much care and attention on the gravy as the roast itself.  So here we go with deep fried gravy, or Bitterballen.

The end result is less like deep fried gravy than you might imagine, but has a lovely golden fried crust around a creamy savory filling.  For some reason it made me think of a really good quality scotch egg!

This recipe should make between 16 and 20 Biterballen

For the coating
2 Beaten Egg
Flour for dusting
Breadcrumbs

Method
Fry the minced beef to brown it, then set it aside for later.  Next you need to make a roux. In a large pan, heat the butter gently and add the flour, stirring constantly over a low heat.  Next, add the stock in small quantities, again, stirring all the time so that all the liquid is absorbed.  Be careful not to get any lumps in the roux, it should be smooth and silky consistancy.

Next add the browned beef, finely chopped onion and parsley, then season with salt, pepper and a pinch of ground nutmeg.  Finally, transfer the mixture to a container and put in the fridge, so it sets. This should take about 2 hours. 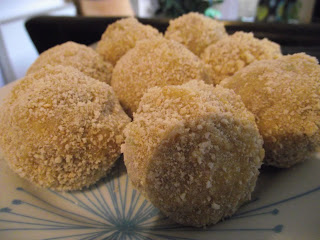 When the mixture is set, take it out of the fridge and roll into balls, then coat with flour, beaten egg and finally breadcrumbs.  Once they are covered evenly, return them to the fridge whilst you heat up enough cooking oil to deep fry the balls.

Fry them until they are golden brown in batches of 5 or 6, then they are ready to serve.  In Holland, it is apparently traditional to eat them with mustard, and possibly beer, which sounds like a great idea to me!  Enjoy!