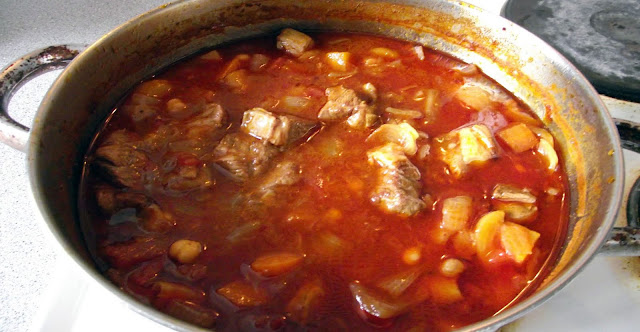 As I write this, it's a stormy morning, wind is blowing fallen leaves through the window and everything has that 'encroaching autumn' feeling.  And whilst the turning of the season is not the best of starts to a Monday (waving goodbye to the summer, realizing you didn't have half as many lazy days and drunken nights as you planned in march) there are some reasons to be cheerful.

One of these is the return of stews and casseroles to the dinner table.  If there is one thing that I could eat endlessly, until I burst (and sometimes it really feels like I will burst)  it's got to be dumplings - accompanied if at all possible by a nice rich beef stew.  My Nana, who's only cooking technique was to boil things for 3 hours, then another hour, just to be sure, made the best stew (unfortunately, the whole boiling things until they are dead technique did not lend itself to very pleasant dumplings - they resembled doughy pebbles)

Today's recipe, however, is not beef stew, nor does it contain dumplings (although you could throw some in if you really wanted to.  Come to think of it, where did I put the suet..?)  What it is, however, is a lamb tagine.  Now, I have to confess that I don't own a massive range of kitchen implements, accessories or geegaws (but I do like using the word geegaw) so my tagine is just made in a casserole pot, rather than the proper way.  If you do have access to a swanky earthenware pot, go for it!

Method
Start by making up your spice mix, giving it a good grind in a pestle and mortar (one geegaw I do own...) or alternatively, you could just buy some Ras el hanout mix, if your supermarket or local shop stocks it (mine doesn't)

Heat some oil in a thick bottomed casserole dish.  To this, add the diced lamb and fry it until browned on all sides, then remove from the pan.  Next, put the chopped onion, carrot and garlic in and let the vegetables soften for 5 minutes.

Add the spice mix, tomatoes and lamb and cook for a few minutes before adding the chickpeas, stock and apricots then bring the whole thing to a simmer, before moving it into the oven and cooking for an hour or there abouts.  Make sure that the lamb is nice and tender before serving, and if it's not quite there after an hour, put it back in the oven for another 20-30 minutes.

Take out of the over and let cook a bit before serving with rice or cous-cous, and dressed with corriander leaves and pomegranate seeds.

This dish can be prepared up to two days in advance, then you just need to warm it through before serving, and the flavours will be even more intense.  Enjoy