Another plum recipe, because we were given quite a few plums, and rather than just make a huge batch of one thing, it seemed like a good idea to experiment.  So here is a plum chutney.  As well as having the plums given for this one, we were also given the onions (thanks Mum!)
I think that for Christmas, I will be giving everyone I know either seeds or baby trees (Saplings?  Treelings?) so that next year I will be on the receiving end of even more fruit and vegetables.

Also, if you know someone who has a fruit tree in their garden but doesn't do anything with the produce (you will be able to pinpoint the houses of these people as the pavement in front of their houses will be slick with rotting windfall)  why not just knock on their door and offer to relieve them of the fruit that they don't want.  After all, it would be such a shame to let it all go to waste!

Method
Pit, chop and wash the plums, roughly chop the onions and peel, core and chop the apples.  Put the apples, onion and garlic in a blender and blend finely. 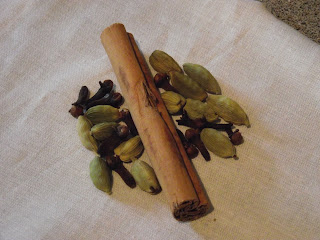 If you are worried about losing any cloves or cardamom pods, then tie them up in a little muslin, to make fishing them out at the end easier. 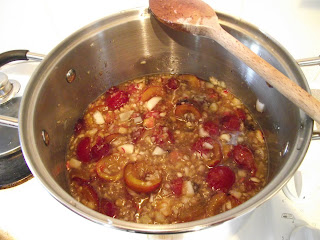 Put all the ingredients in a large pan and bring to a boil, then cover and let the mixture simmer for 2-3 hours, until it reduces down to a lovely rich and spicy chutney. Pretty much all the liquid should be gone and it should have a jammy consistency. Remove the cloves, cardamom and cinnamon stick, then transfer to jars.

The chutney will improve over time, about 2-3 months will let it mature into a wonderfully rich flavour, so make it now and eat is at Christmas (There I go again mentioning Christmas...)

The chutney goes great with pork sausages, but feel free to try it with anything that takes your fancy!  Enjoy