When it comes to love 'em or loath em foods, there are only a few that I can think of that divide opinion as much as Black Pudding (Marmite and various permutations of offal being the others - all of which I love, by the way.  Hmmm, I wonder what that says about me?)

In recent years, the humble black pudding ('Uurgh, you do know it's made from blood', I hear some of you say, and 'yes we know, but it's so very tasty' the rest chant) has been given something of a new lease of life due to various chefs and restaurants picking up on it and using it as an accompaniment to pork dishes, amongst other things.  Me, I never stopped loving it, ever since nattering my mum for some when I was young I have been a black pudding lover.  The wonderful savoury flavour goes well with a lot of things, and a fried breakfast isn't complete without a few slices of deep rich black pudding next to the bacon. 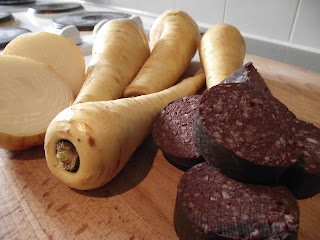 So I thought I would give you this soup recipe to show off black pudding, along with a couple of other textures / flavours that go well with it - apple and cream, and also dill, all of which combine to make a rather tasty and a bit unusual soup.

Incidentally, if anyone else has a massive craving for love / hate food, I'd love to hear about it - tell us all about it in the comments section.  Me, I'm planning a tripe soup recipe for some time soon, which I'm sure will be, ummm, interesting

Next add the stock, then bring the soup to a simmer and cover, let cook for 30 minutes or so and then transfer to a food mixer and blend until smooth, and return to the pan 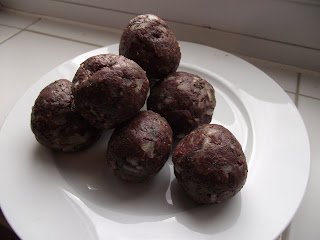 Next make the meatballs. Finely chop the shallots and fry them in a little butter for a few minute to soften them.  Remove the skin from the black pudding. In a bowl, use a fork to break the black pudding down, then mix with the dill and cooked shallots (It is easier to do this if the black pudding is at room temperature)

Then form the mixture into balls - make them as big or small as you want, depending on how many people you are feeding, then fry them in the butter until cooked then keep warm.  The smaller the meatballs the better, as then there are more to go round, and they make a savoury counterpoint to the sweet soup (when I made it, everyone wanted more, so feel free to increase the amount you make!)

Add the cream to the soup and reheat gently, but don't let the soup boil. Season to taste 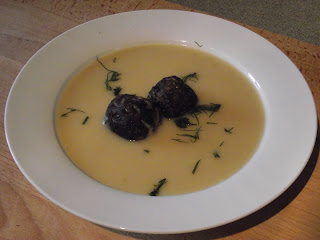 Warm some dishes and then place the meatballs in them, then pour the soup over the top and serve, garnished with dill fronds and enjoy!

Don't forget to let us know about the foods you love but everybody else hates!