A random childhood memory.  When I was about 8, playing hide and seek in our back garden, being told off for using the best hiding place I had ever worked out. This hiding place, I feel safe in revealing 30 years later, safe in the knowledge that a) most people have stopped looking for me, and b) the location in question is long gone, was in our greenhouse.

Not being all that well off when I was growing up, our greenhouse was a rather unconventional structure, fashioned from off-cuts of wood and heavy-duty plastic sheeting in place of glass; a wonky door secured by a latch being all there was in terms of security, and the plants inside made the best hiding place for the aforementioned game of hide and seek, if one could wriggle round behind them without crushing too many of them.

I still remember the smell inside this greenhouse, the smell of plastic and tomato plants, the stifling heat on a July afternoon, trying to remain motionless as Paul Mitchell or Ian Nelson stalked me as mercilessly as a big game hunter stalks a vicious predator.

But what has all this got to do with recipes I hear you ask as you stare at your watch and tap your feet impatiently. Well... 30 years later I find myself in the position of being the one growing the tomatoes, rather than hiding behind them, and although our plants didn't fair too well this season, being by turns baked in unforgiving heat and then drowned by unseasonal weather, the rather straggly looking plants still yielded a rather respectable crop before finally giving up the ghost.

And as all I seem to recall the tomatoes of my youth (also possibly the title of my autobiography) only ever being sliced in half and served with pickled beetroot, salad cream and flat lettuce leaves as a salad, so I thought I should put my tomatoes to better use.

And it is this crop that I have decided to turn into a  chutney which uses the tomatoes and also chillies, which have also been grown by my own fair hand, and have fared much better than the tomatoes for some reason best known to the gods of horticulture.

However, I do think that it's about time for me to fashion my own ramshackle greenhouse from old timbers and PVC in order to increase the yield for next year.  Just hope that the neighbors don't complain about the sight of it...

This recipe only makes a few jars, because we didn't have a huge crop of tomatoes.  You should feel free to increase quantities as you see fit!

Method
Heat the oven to 200ºc.  Wash and roughly chop the tomatoes, then put them in an oven-proof dish to roast for 30 minutes, with a drop of olive oil and a splash of balsamic vinegar and some salt. 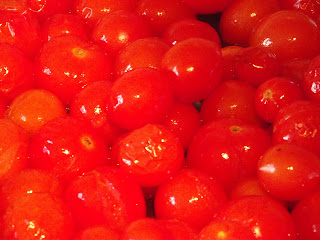 When the tomatoes are done, take them out of the oven an allow to cool for a bit.  At this stage, I removed the skin of the tomatoes, mainly because they were cherry toms, and also being home grown, the skins were a bit tough.  However, you can leave them on, especially if you are using bigger tomatoes.  When you are removing the skins, try to save as much of the liquid than comes out of the tomatoes, as it's a shame to lose all that flavour

In a dry pan, heat the  Cumin, Coriander and mustard seeds until they are toasted.  This should take a minute, keeping the seeds moving all the time so they don't burn, but releasing a wonderful aroma.  Transfer the toasted seeds to a pestle and grind them to a powder.

Finely chop the onion and fry them in a little oil in your large pan, then add the chopped garlic, grate the ginger and add that too, cooking for 3 to 5 minutes over a low heat until everything is softened but not browned.

Return the tomatoes to the pan, add the vinegar, sugar, ground spices, finely chopped chillies (with or without seeds, depending on how hot you like things), add the fish sauce and bring to a simmer.  Cook over a low heat for around 2 hours, stirring occasionally, until the jam reaches a thick consistency, with almost all the liquid gone. 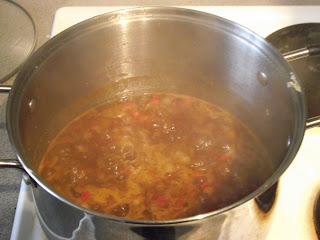 By now the vinegar smell will have gone and just left the rich fruity smell, the flavour will also have grown richer and you will be aching to make some bacon or sausage sandwiches to try it out on.  As always, however, chutney's flavours improve with age, so try and save at least a few jars in a dark, cool place for a month or so, for the flavours to grow more intense.  Enjoy!