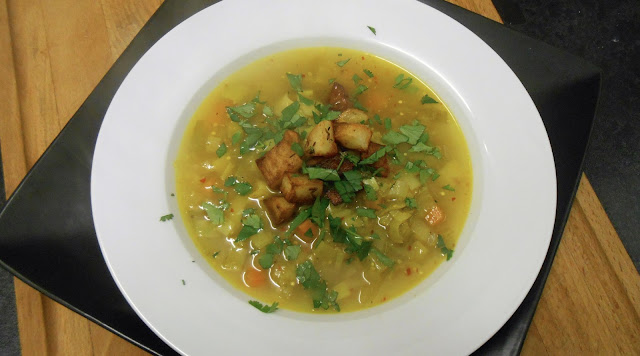 So, after a slight break in service whilst we dismantled the entire Soup Lab, moved it about 500 meters and rebuilt it in a top secret location, I'm back.  That's right, I moved house to somewhere much nicer and without all the flights of stairs to climb with heavy shopping.  As a consequence of this, I've been a little too busy over the last few weeks to put up any posts.  I now have a fully functioning kitchen again, so here goes a quick one.

This was a veg box recipe, as in the veg box delivery we get every week provided all the ingredients.  Initially, it was going to be a straight leek, potato and blue cheese soup, but then an accident with the blue cheese (we ate it on Friday) plus the realisation that I'd done something very similar on the blog before made me change my mind.

So we have Curried Leek and Potato soup, which I have to admit to adding way too much chilli to, rendering it unedible to those members of Team Soup who have a lower tolerence to hot foods than I do, and also lack the asbestos tongue that I gained when I was bitten by a radioactive... No, wait, that was Spider-man, wasn't it?

Anyway, be careful when adding the chilli to this recipe, unless you want to have to make cheese on toast for your significant other, despite slaving over a hot soup all afternoon.  (This isn't the first time this has happened either, the infamous Tom Yum incident of 2011 still sends hot, burning shivers down my spine...

1.  Remove the tough green part of the leeks and then thinly slice the rest.  Finely chop the onion and carrot

2.  Heat some oil in a large pan.  Gently sweat the leeks, onions and carrot for 5 minutes, until they soften. Add the garlic, grated fresh ginger and spices and sweat for another 2-3 minutes, so the vegetables get covered in the spices.

3.  Add the stock, bring the soup to the boil and then cover and simmer for 30 minutes. Check seasoning and adjust to taste.

4.  Whilst the soup is simmering, peel the potatoes and cut into small (less than 1cm) cubes.  Heat some oil in a frying pan.  Over a gentle heat, fry the potato cubes until they brown and are ccoked through - this should take about 10 minutes.  Throw the cumin seeds in a few minutes before the potatoes are done

5.  Serve the soup topped with a handful of the potato cubes.  Garnish with some fresh coriander and serve.  Enjoy!