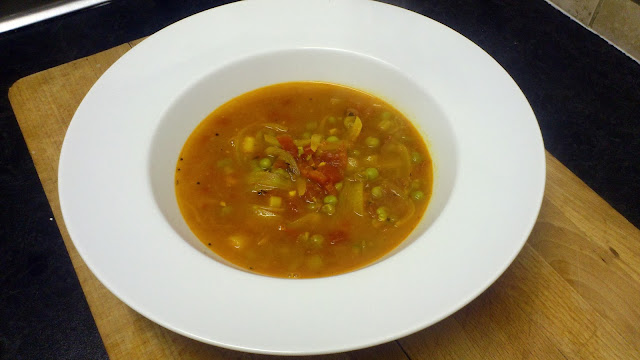 This is pea soup recipe number 5 on the blog!  Who would have thought that I could get so much mileage out of the humble pea?  And unlike the others, which are variations on two themes, this one is a little different.

You could use frozen peas or fresh, but the great thing about frozen ones is that using those makes this pretty much a cupboard soup - as long as you have a vaguely well stocked spice cupboard - and the fact that its quick and easy to throw together, like most soups, makes it perfect for a tasty lunch or when surprise visits happen.  In fact that could apply to most soups - they really are perfect food, aren't they?

Also, I love the fact that a curry sauce is also known as gravy, as you all know just how much I love gravy.  I assume that the term was taken to India by the British, but you, lovely readers, may know better.  If so, please let me know... 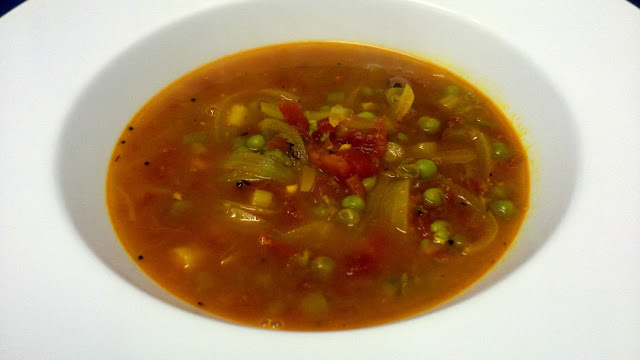 Method
1.  Heat some oil in your soup pan.  Once it's hot, add the mustard seeds, cumin seed, cardamom and bay leaves and fry them for 2 minutes, so they flavour the oil.  Watch out, because the mustard seeds can pop in the oil and go everywhere!

2.  Add the finely chopped onion, garlic and ginger puree, then cook through until the onions are browned a little

3.  Add the chilli, turmeric and coriander, stir them through the onions, and then add the tomatoes, cooking until everything reduces down to a thick, spicy paste.

4.  Add 900ml of water, chopped spring onions and half the peas.  The other half of the peas should be smashed to a pulp - I used the end of a rolling pin - and then added too.  Add some salt, then bring the soup to a simmer, cover and cook for 25-30 minutes.

5.  Add the garam masala and then serve.  Accompany with naan or boiled rice.  Enjoy!
Posted by Dan at 13:25 2 comments: 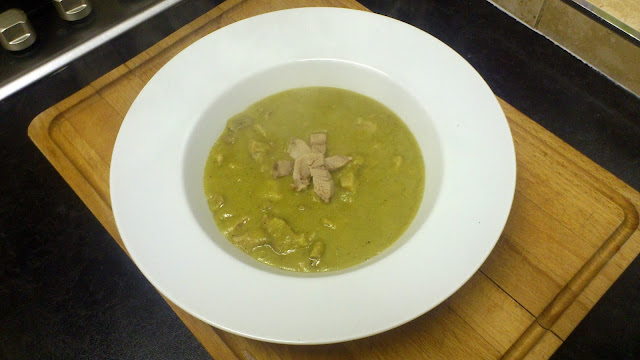 There's a bit in one of The Hitchhiker's Guide to the Galaxy Books (The Restaurant at the End of The Universe, I think, but I could be wrong) which says that 85% of species in the Galaxy eventually discover a drink called Gin and Tonic, or something similar.  In Battlestar Galactica, The song 'All Along The Watchtower' features prominently, even though the characters have never been to Earth or heard of Jimi Hendrix*.  When quizzed about it, the producers said that something were so perfect that they would exist everywhere in the Universe at one time or another.

So what does this geekery have to do with soup, I hear you ask.  Well, much like Gin and Tonic and All Along the Watchtower, split pea and ham soup seems to have appeared in a great many guises on my culinary travels (all of which pretty much happen from the comfort of my living room, in a rather magical fashion)

I've done at least 4 other pea soups on the blog, but never this Particular classic (See what I did there?) It's a soup that demands a little investment of your time - soaking the peas and cooking the ham before its ready, but it is totally worth it.

This is the soup that is named after the famous Smog of London, and it's so thick and rich and gloopy (I love that word, gloopy,) that you really can see why an all obscuring yellowish green fog would have inspired such a soup.  The smog may now have lifted, but on a chilly winter's eve, I can't think of a more perfect soup to enjoy!

* Yes I know Bob Dylan wrote that song, but a) I hate Bob Dylan and b) I may be a cylon 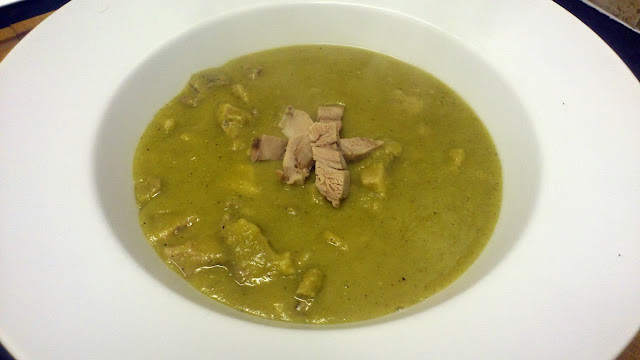 1.  Soak the peas for 24 hours, with a teaspoon of Bicarb and enough water to cover them properly.  The bicarb helps to soften the peas, and lets them cook quicker - the same thing works with chickpeas if you are making hummus from scratch

2.  In a large pan, place the ham hock, 2 litres of water, roughly chopped celery, carrot, bay, onion and peppercorns.  Bring to a simmer, cover and cook for 2-3 hours, depending on how big the ham hock is. Once it's cooked through, take the ham out of the cooking liquid and allow to cool

3.  Strain the cooking liquid to get all the veg out of it, and then set that to once side too.

4.  In your soup pan, fry off a thinly sliced onion in the butter until its soft and golden.  Next add the liquid the ham was cooked in.

5.  Drain and wash the peas, then add those to the pan and bring to the boil, then cover and cook over a low heat for 2 hours or until the peas have softened and are cooked through.

6.  Using a stick blender, puree the soup (you can do this just a bit to give the soup more texture, or completely blend it if you prefer)

7.  Add most of the ham from the hock, and the Worcestershire sauce and bring back to the heat to warm through, then serve with crusty bread and garnish with some of the ham hock shredded on top.  Enjoy
Posted by Dan at 13:11 No comments:

I have a friend who is obsessed with creating the perfect curry. As obsessions go, its far from a bad one, but it can make going out for a meal with him an, umm, interesting experience.  On more than one occasion, when visiting local curry houses he has spent inordinate amounts of time quizzing the harassed looking staff on the ingredients used in various dishes, and has from time to time been invited into the kitchen to talk to the chef (although this may have just been a ploy by irate serving staff to get him out of their hair)

This friend has shelves laden with curry recipe books, and his kitchen is a mountain of jars and packets (which even put my obsessively labelled jars to shame) and like some Dr Frankenstein with a turmeric stained lab coat, he one day staggered out of the kitchen after experiencing his eureka moment.  And that moment was adding fenugreek to his curry dishes.  Now obviously, this doesn't work across the board, but when added to some curries it adds an amazing savoury deep note of flavour which really makes you think you are in a really good curry restaurant.

And now, yes, I too am a little bit obsessed with the flavour, sprinkling it liberally on dishes where it probably doesn't belong.  But oh the flavour.  It's like my caraway obsession from last year all over again )although less likely to get stuck between your teeth...)

And so, obviously, I had to see if there was such a thing as a fenugreek soup.  And whilst there wasn't an actual fenugreek soup, I did come across this tasty little number.  It is an egg drop soup, which I hadn't really tried before - I was always worried about making a soup with the consistency of runny scrambled eggs (a dish that once made me cry as a child, but that's a story for another day...) but this actually turned out rather nice! 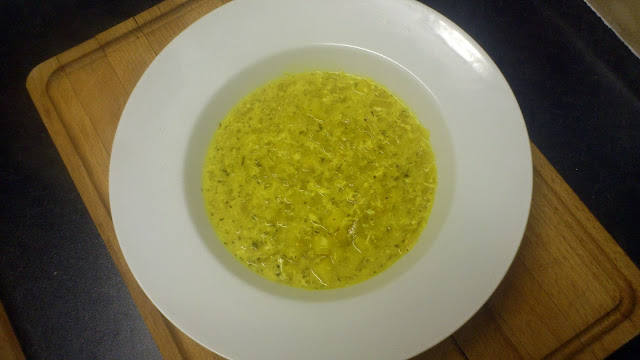 Method
1.  Peel and thinly slice the onions, peel the potato and cut into small cubes and finely chop the garlic.

2.  Heat the butter in your soup pan and cook the onions over a low heat until they soften and turn golden.

3.  Add the garlic and potato and cook for another few minutes

4.  Add the stock, thyme, fenugreek and bay leaf, then bring the soup to the boil, cover and reduce the heat to a simmer.  Cook for 30-40 minutes, until the potatoes are soft.

5. Add the lemon juice and adjust seasoning to taste

6.  In a separate bowl, beat the eggs, then stir them into the soup just before serving, stirring the soup constantly to make sure the egg mixes thoroughly.