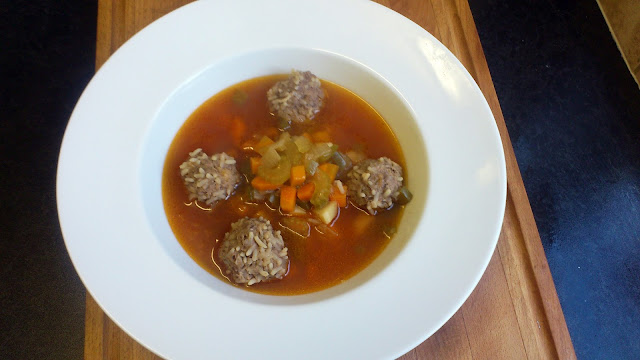 Running a soup blog, I invariably get asked the question "What is your favourite soup?".  Its a really difficult question to answer, obviously.  That's like asking "Which is your favourite child" and I wouldn't want any of my soups to feel like they were second best. However, after several years of making and eating soups from around the world, I'm beginning to think that my favourite soups are those from Eastern Europe.

The reason for this is that I think they get the flavour combinations right - often using lemon juice, or vinegar to add a sour note that works really well.  They are often pretty simple recipes, and (oh yes) often incorporate either dumplings or meatballs.  And regular readers will know how I feel about those two...

So my round-the-world soupstravaganza hits Romania, which is undoubtedly most well known as the place where Dracula lives.  I'm pretty sure some other stuff must have happened there, but really nothing of importance from the time Peter Cushing killed Vlad until the present time*

They did, however, come up with lots and lots of exiting soups, many of them with that slightly sour taste that I love so much.  And this one has meatballs, so I just had to give it a go.  The addition of rice to the meatballs makes the meat stretch that little bit further, and although it's a simple soup to put together, the end results are so tasty...

* This may not have happened 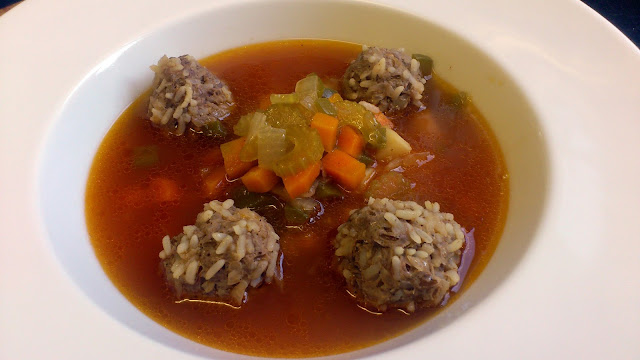 Method
1.  Peel the carrots and parsnip, cut them into small cubes.

2. De-seed the green pepper and cut finely, as well as one of the onions and the celery stalks

3.  Heat some oil in your soup pan and gently fry the vegetables until soft but not starting to colour

4.  Add the stock to the pan, as well as the tomato puree, lemon juice and bring to the boil.  Cover the pan and simmer for 30 minuted

5.  In a mixing bowl, combine the minced beef, washed rice and then grate the other onion and add this to the mixture, along with 1tsp of salt and some black pepper.

6.  Form the mixture into balls about an inch across.

7.  Add these to the soup after 30 minutes and continue to simmer gently for another 10-15 minutes, until the meatballs are cooked.  You will be able to tell when they are cooked as they will float to the surface of the soup.

8.  Adjust seasoning to taste and then serve.  Enjoy!