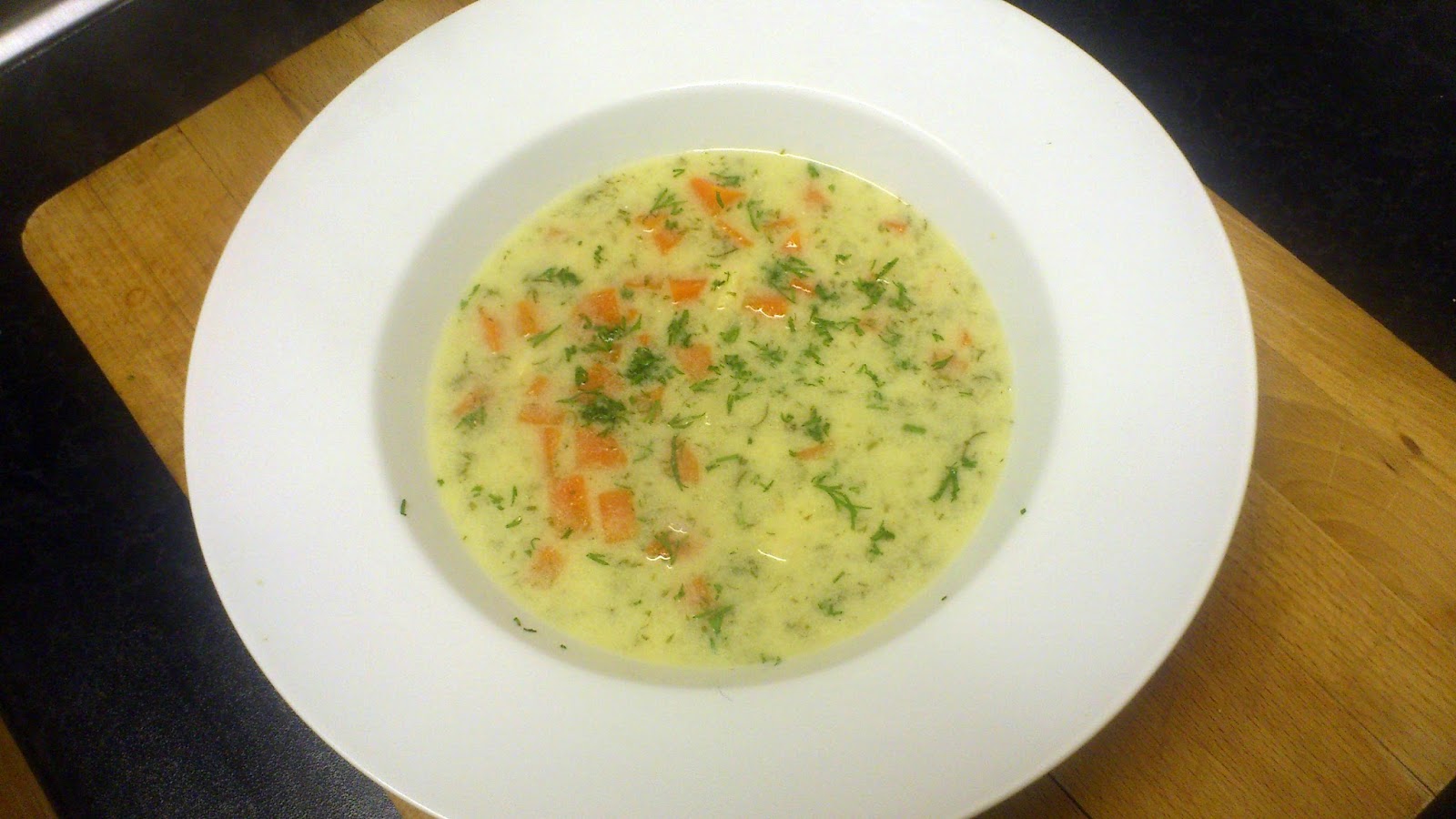 I had some friends who went on holiday to various East European countries, and when they returned, the brought back tales of culinary horror.  Not only was it nigh-on impossible to get a decent vegetarian meal in Latvia, but in Poland - horror of horrors - they put dill on EVERYTHING.  And my friends REALLY couldn't stand dill. Now I can't vouch for the veracity of these stories, but I'm pretty sure my friends would hate this soup...

This is a really simple soup that is really all about the dill, although it is really filling and creamy and would be good as a winter warmer, or as a summer soup.  Of course, the recipe I really wanted to do this week was a Polish Tripe soup, but the supermarket seems to have stopped stocking cow's stomach linings, so I will have to take a trip to Leeds Market to procure some.  You have been warned... 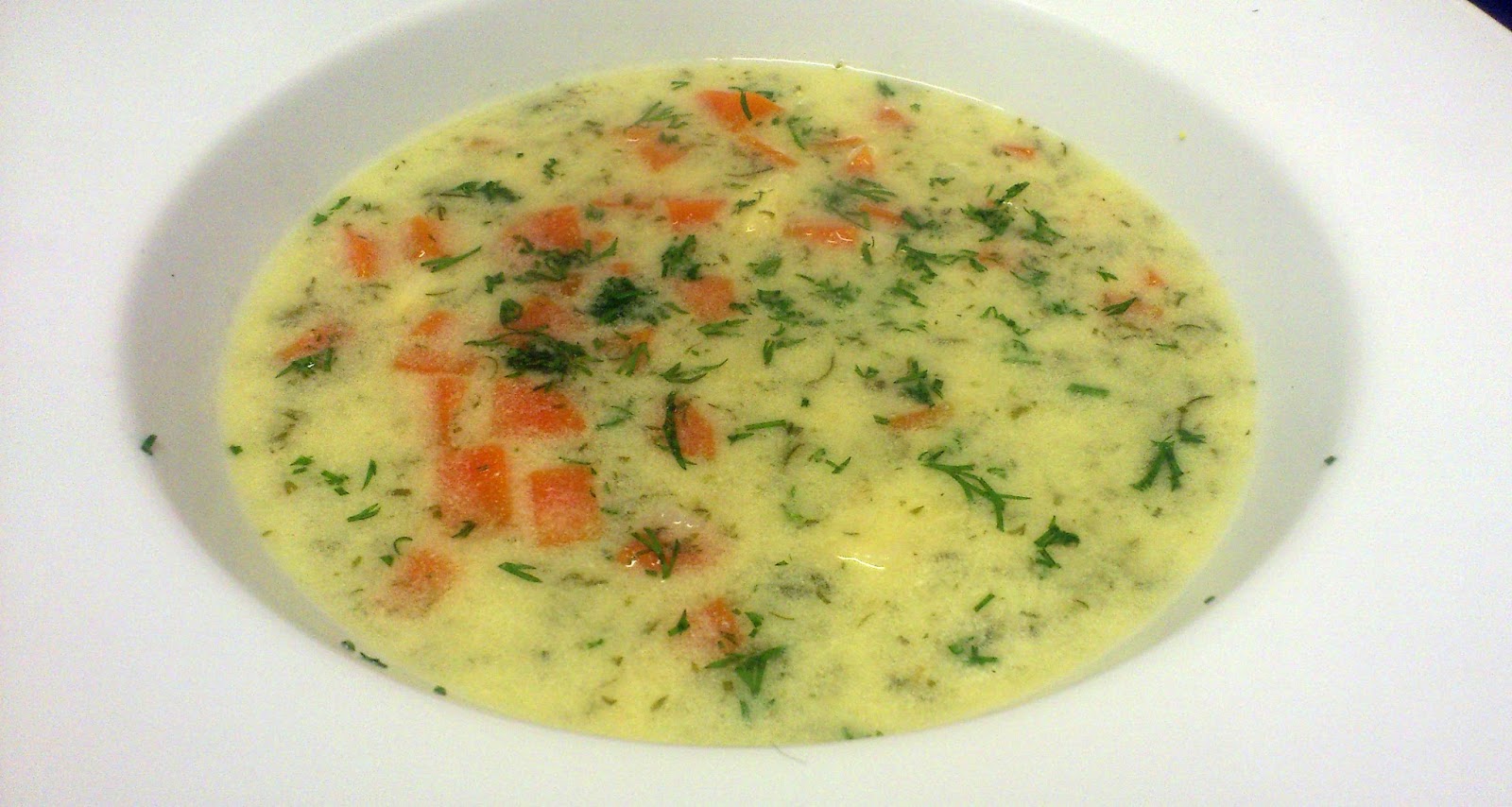 Method
1. In a large pan, heat your chicken stock.  Add the bay leaves and the carrot, potato and parsnip, all peeled and cubed.  Bring to a simmer and cook for 20 minutes

2. After 20 Minutes, add the rice and continue to simmer for another 15 minutes, until the rice is cooked and the vegetables are soft.

3.  Finely chop the dill and add to the pan, along with the sour cream. Heat through

4.  Adjust seasoning to taste and serve with some extra dill for garnish.  Enjoy!
Posted by Dan at 14:47 2 comments: 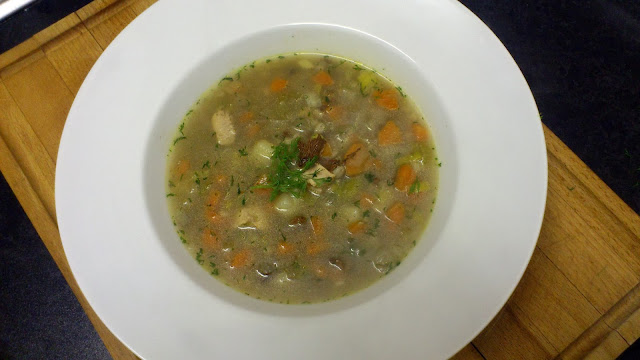 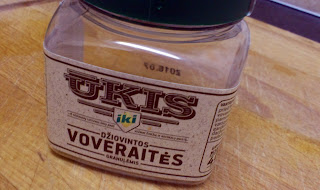 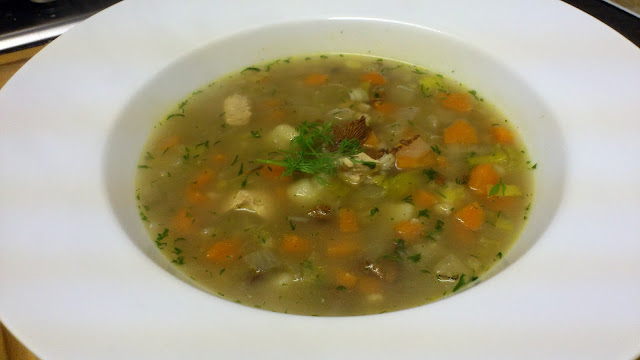 5.  Adjust seasoning to taste and then serve.  Garnish the bowls with plenty of finely chopped fresh dill.  Enjoy!
Posted by Dan at 13:40 1 comment: 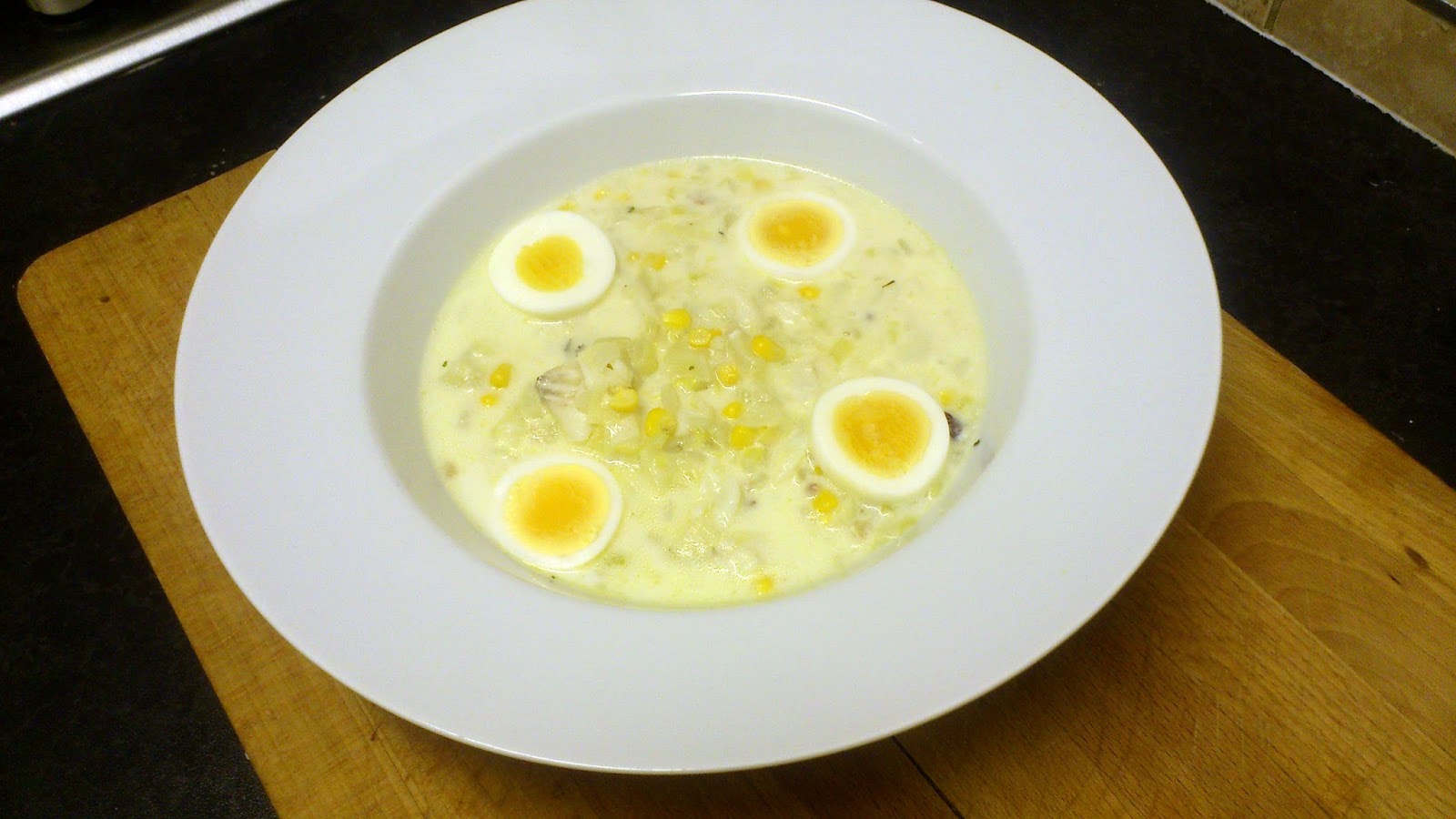 So, it's the new year and here is a new blog post.  And it's a special one.  This soup recipe makes 100 soups on the blog! Wow.  When I started doing this blog, mainly as a way to keep occupied and to inspire me to cook new and interesting things, I never thought I'd make it this far.  In the 3 years I've been doing this, I have found by cooking becoming increasingly more adventurous and that I've also gotten a lot more passionate about what I eat.

And the soups - who would have thought that there even were more than a hundred types of soup in the world?  And it seems that I've just scratching the surface - not just in terms of 'Ooh, what veg do I have in the cupboard?  Let's jam them into a soup...' which is a perfectly acceptable way of coming up with recipes, but also in terms of national dishes, soups particular to countries, cuisines and regions.  So many wonderful tastes and recipes yet to come.

So thanks to you, my lovely readers - some of whom I have talked to on twitter (and if I haven't, why not say hello - I'm @souptuesday) for reading this blog, and hopefully enjoying the soups I've made so far, and put up with my occasional ramblings and bad jokes.

As well as more soups this year, you can look forward to some more posts about what else I'm eating (after getting more than my own bodyweight in cookbooks for Christmas, I'm itching to try out some fancy-pants new dishes) and also the World Cup Food Challenge - much like the Olympic Food Challenge, where I will be cooking selected dishes from some of the countries taking part in that whole football thing (and showing off my shocking lack of knowledge about the beautiful game)  If you want to know more about it, you can read more (and find out which other food blogs are taking part) by clicking here

And without further ado, the 100th soup recipe - suggested by Mrs Soup, without whom, this blog wouldn't exist... 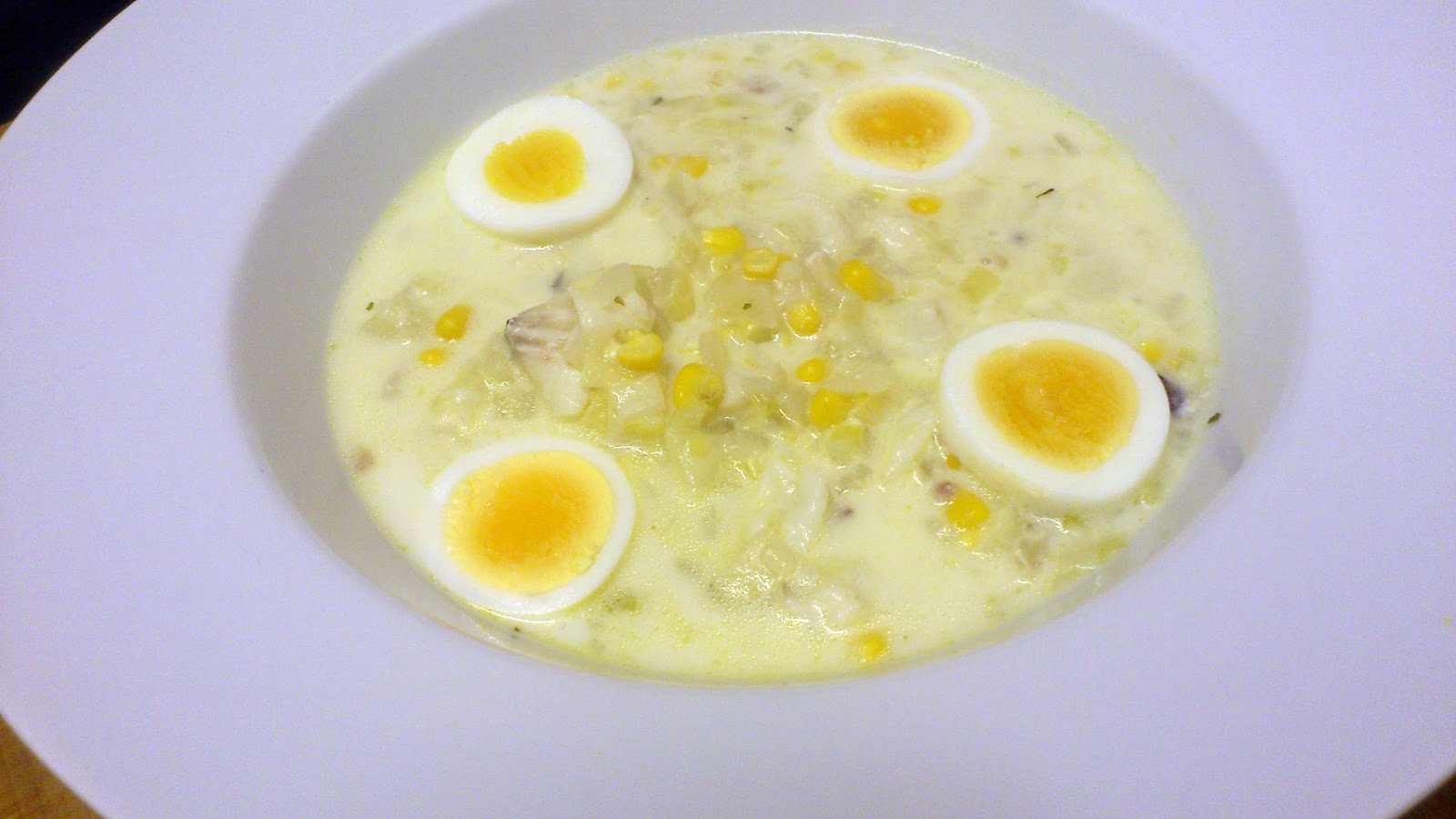 Method
1. In a large pan (I used a frying pan) gently heat the milk and then put the haddock in, simmering over a low heat for 5 minutes, until the fish it poached.  Take the pan off the heat, and using a slotted spoon, remove the haddock, putting it into a bowl for later, flaking it with a fork.  Also keep the poaching milk for later too!

2. Cut the bacon into small pieces.  Heat the butter in your soup pan and gently fry the bacon

3. Finely chop the onion and leeks.  Add them to the pan and then sweat the vegetables until they are soft

4.  Peel and cube the potatoes, then add these to the pan, cooking for a further few minutes.

5.  Add the water, milk, sweetcorn, thyme and bay leaf.  Bring the soup to the boil and then simmer for 25-30 minutes, until the potatoes are soft and starting to break up.

6.  Using a potato masher, break up the potatoes a little more, then add the haddock back into the pan, along with the single cream and reheat gently.  Test seasoning and adjust to your preference.

7 Serve with crusty bread and sliced boiled eggs on top of each bowl.  Enjoy!
Posted by Dan at 11:58 2 comments: