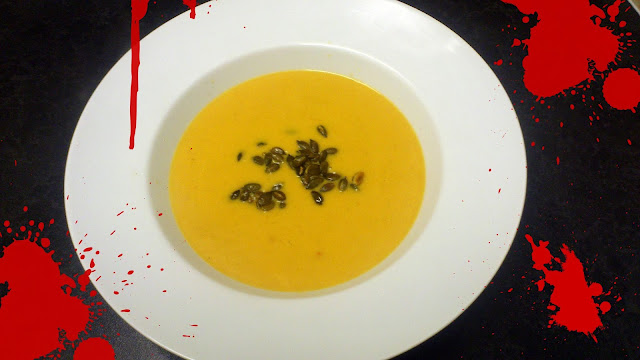 It's Halloween and that can only mean two things... The first is joyless people moaning "Oh, it's such an American thing' they say, but guess what?  So are men on the moon, Breaking Bad, Tom and Jerry and serial killers, and all of those are brilliant things.  The second thing is the humble pumpkin.

Now I have been quite vocal in the past about how people seem to cram pumpkins into everything (cynically one would think just to get more hits on their blogs...) like pumpkin spiced lattes, caramel pumpkin cheesecake dog biscuits and so on.  But in the spirit of evil, I shall join this club with a soup that is perfect for eating on a cold October night whilst watching Peter Cushing do his stuff in The Satanic Rights of Dracula.

It uses quince as an ingredient,  mainly because when we moved into the new Soup HQ, we inherited a quince bush, made some jelly and loved it, which got me thinking if I could use it in a soup.  If you don't have access to a quince bush, lime juice would work perfectly well!

(Also, to get you in the Halloween mood, here's a zombie film I made.  It's a bit gory


[The Following post should be read in the voice of a witch, warlock or sundry demon]

Now the darkness is upon us and the spirits prepare to fly, causing havoc and all manner or malingering, it falls upon me to impart the wisdom of how to prepare a soupe made of the flesh of that most devilish of all the vegetables that grow in the dirt of the grave - the pumpkin.

Be warned though, this is not the tame soupe but a devilish fiery concoction.  No thin and watery gruel this, but a most unusual brew, made that much more strange by the addition of the fruit of the Quince bush, which imbues upon said soupe a sharpness such as a lime would also provide.  However the soupe will not reach full efficacy unless the flesh of the quince is interred into it.

The sprinkling upon the top of the soupe of the toasted seeds of the pumpkin also imparts a delicious savoury note which is only matched by dry roasted eye of newt or other water borne creature...

Go ahead, make this soupe if ye dare...

Method for preparing the soupe

1. Murder the onion and cut that into small pieces.  Show the onion no remorse, even if you cry.  Do the same to the chili.

2. In a cauldron or other suitable piece of kitchenware - preferably cast iron and under a full moon - heat up some oil and then fry the onion's remains.  Add the chili, ginger and some garlic to keep away vampires.  Cook until dead but not burnt - maybe 5 minutes...

3.  Add the coriander and cumin powders (or ground monkey paw if you have it) and then cook for a few more minutes.

4. Hack up the pumpkin like Michael Myers on Prom Night.  Use a very sharp, pointy knife and slice the flesh, cutting away all the skin and tough bits.  Then cut the remaining soft fleshy parts into unidentifiable pieces. Leave no incriminating evidence

5.  Add the stock, pumpkin and tomatoes to the cauldron, salt the soup so nothing more shall grow there.  Cook for 45 minutes and then remove from flame and torment. Allow to cool until cold as the grave.

6. Blend, mash, grind, flense or otherwise reduce the soup to the consistency and colour of freshly spilled blood.

7.  Peel the skin from the very living flesh of the quinces and then chop them asunder (Be careful as the dastardly quince harbours much in the way of tricky gristly and tough bits.  Be sure to remove these fully)

8.  Add some water to another pot and bring to a goodly boil.  Into this pot dispose of the Quince's flesh and render down to pulp or puree.

9.  Add the resultant puree, plus the juice of one coconut to the soup and reheat to renew the agony.


10.  Serve to hungry demons with a scattering of the pumpkin's own seeds upon it.  Try not to choke upon the resultant mess
Posted by Dan at 11:32 2 comments: 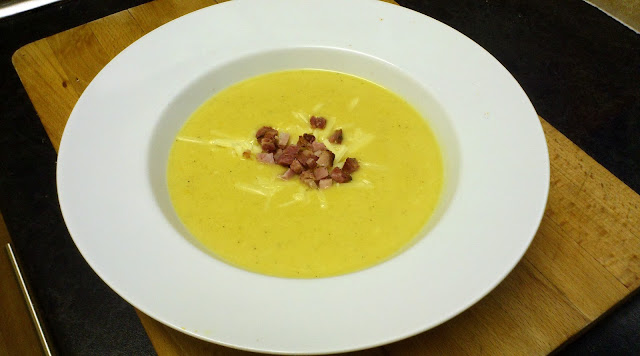 I think we can all agree that winter is finally here and that means two things - 1) everyone moans about the weather and 2) my blog gets more hits as everyone rather sensibly says 'ya know what, now the nights are drawing in, I need some soup, tasty and comforting, to take my mind off the rain and the fact that I can't afford to put the heating on any more...

And like some kind of soup supplying fairy, I can make that wish come true! And there can be few better and more comforting soups than this cauliflower cheese recipe.

One of the things that we did here at soup HQ over the summer was convert the patch of weeds behind the house into a vegetable garden.  Being that I was our first year of properly flexing our green fingers, the garden more or less resembled the patch of weeds it had previously been, but with some brave veggies poking their way through the canopy of bind weed (next yearm I shall be more prepared for just how much work even a small veg patch can be to maintain)

Amongst the things that did grow really well were cauliflowers. I love caulis and ours were turned into all manner of tasty dishes (gobi aloo being my favourite) but I realised that not a single one had been soup-ified.  That was quickly rectified with the last two being added to this recipe.  The stronger the cheddar the better when making the soup, and if you feel like you need some meat in the dish, garnish with some crispy bacon bits, although the soup works fine without them.

Next year, I'll be growing lots more stuff - if anyone has any suggestions for their favourite veg to , grow, especially ones that are fairly idiot proof and grow anywhere, Id love to hear from you... 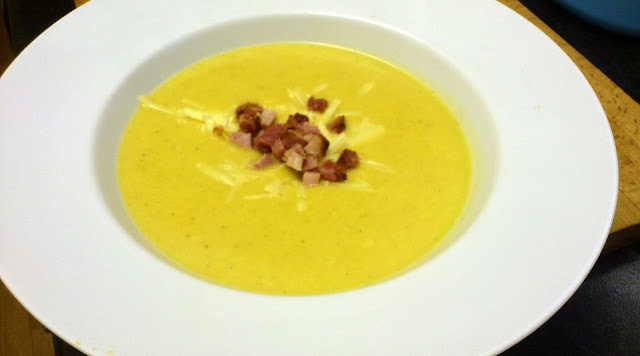 Method
1.  Peel and slice the carrot, potato, onion and garlic, chop the celery and cut the cauliflower into florets

2.  In your soup pan, heat the butter and then gently fry the carrots, onion, garlic and celery until it starts to soften.

3.  Add the cauliflower, potato, thyme, mustard and stock, bring to the boil and then reduce to a simmer, covered, for 30 minutes, until the cauliflower is softened

4.  Remove the pan from the heat and allow the soup to cool

5.  Blend until smooth, then return to the pan

6.  Add the milk and cheese and bring to a simmer again.  Adjust seasoning to taste and then serve

7.  Garnish with some more grated cheddar and some crispy bacon bits 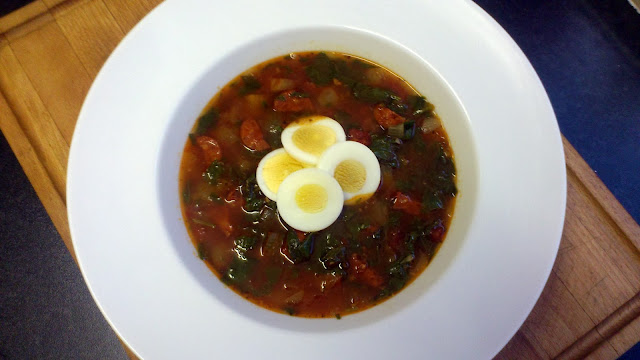 So our round-the world-in-several-soups trip reaches Spain and a delicious, hearty chorizo and chickpea soup, which is prefect for winter evenings as much as it is summer days.

Whilst we are on the subject, having made this soup and also some paella in the last few days, the inevitable discussion about pronunciation of various words came up.  Is it Pie-ella or Pa-ya-yah, Choritzo or Choritho? I always feel like there is some snobbery when people correct my pronunciation of foreign words - after all there are plenty of common English words that we still can't agree on (S-kone or s-gone for instance) and nobody ever condescendingly tries to correct my pronunciation of those words.

Ah, lets's call the whole thing off, shall we? In the meantime, I think that sliced hard boiled egg should be a made into a compulsary topping for every soup that I make in the future - I am almost as obsessed with it as I am with dumplings and black puddings at the moment.  It's such a simple addition to any dish but it adds a creamy, rich extra bit of goodness to it.  Go on and try it, you know you want to... 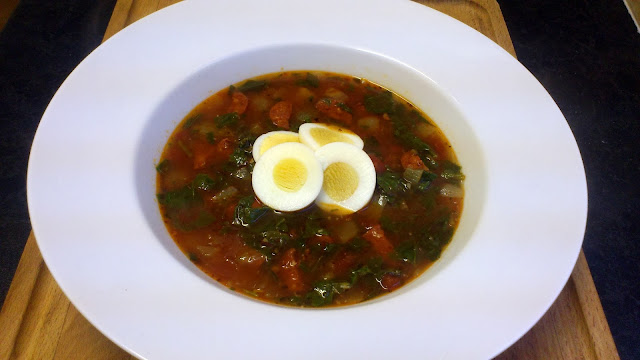 Method
1.  Finely chop the onion, celery and garlic.  In your soup pan, heat some oil and fry the vegetables until they start to soften.

2.  Add the chorizo and thyme and cook a little more.

3.  Add the stock, sherry, tomoatoes and drained chickpeas, then bring the soup to a boil, reduce the heat and simmer for 30 minutes.

4.  In another pant, hard boil your eggs and set them aside to cool

5.  After the soup has been simmering for 30 minutes, add the chopped spinach and let cook for another 5 - 10 minutes, adjust seasoning and serve

6.  Top each bowl with a few slices of hard boiled egg. Enjoy!