Sometimes making soup is about having the freshest ingredients, in season and still covered in the soil they were grown.  And sometimes it's about making the most of whatever old stuff you have lying around, as quickly as possible but still making sure to tastes amazing.

A lot of recipes that claim to be 'cupboard soups' quite plainly aren't - one I found the other day recommended throwing in a left over ham hock.  I ask you, who in the world has a ham hock that they just found lying round at the back of the fridge?  Maybe the Queen does (and if you're reading - hope you are enjoying the soups your maj) but the rest of us probably not.

But I'm pretty sure that you could throw together this tasty little number without too much trouble - and even if you don't have a leek, courgette would do, and you could at a push leave out the cheese (or scrape the mould off that bit that is hiding in a tupperware at the back of the fridge - it's still good...)

One other thing - is it pronounced 'Shau-dare' or 'Chow-dah"  (Yes, just like that episode of The Simpsons - I was giggling slightly insanely whilst making the soup just thinking about that..)

Method
1.  Peel the potato and cut into small cubes, finely chop the onion, leek and celery.

2.  Heat some butter in your soup pan and then cook the vegetables over a low heat until they start to soften.

3.  While the vegetables are cooking, thaw your sweetcorn in boiling water then drain and use a potato masher to break up the kernels a bit.

4.  Add the stock, milk, bay leaves and thyme to the soup pan and then put the sweetcorn in.  Bring to the boil and then simmer for 30 minutes.

5.  Check and adjust the seasoning to taste - lots of black pepper works very well.  Grate the cheese and stir this in just before serving.  Enjoy!

So I'm trying to get in the summery mood.  Now there are vegetables planted in the garden which will hopefully be ready to turn into soup later in the year, and that fiery ball has returned to the skies, it's a bit easier to think that there might be a summer after all.  (Please don't remind me of this statement when it rains from now until September...)

I realised that pretty much all the soups I have blogged recently have been pretty heavy, comfort food type recipes. This is probably for two reasons - one is that it's been sooooo cooooold, and the second is that I think the big warm blanket of creamy warmth is the reason I love soup so much (Please note, don't try to make an actual blanket out of soup) but there are lots of other soups out there which are fresh and light and summery.

Like this one.  Pho is from Vietnam and I imagine it's the sort of thing that you can buy from vendors at the side of the road, like Blade Runner with sunshine (possibly) and it's a very light, fragrant soup that would work well as a starter or as a snack on a warm day...

Method.
1.  Dry roast the coriander, star anise, cloves and cinnamon.  Place them in your soup pan over a low heat and cook until they start to release their aromas

2.  Roughly chop the carrot and onion.  Place them in a pan with the dry roasted spices, ginger, soy sauce and bay leaves, as well as 1.2l of water.  Bring to the boil and then simmer for 30 minutes.

3.  Remove from the heat and let cool.  Strain out all the bits and return to the pan

4.  Cook the rice noodles according to the packaging.

5.  Cut the broccoli into florets, slice the bok choi.  Steam them for 5 minutes, until they are soft

6.  Put some noodles in each soup bowl, then cover in the broth, and then top with the steamed vegetables and some fresh coriander and slices of fresh lime to garnish.  Enjoy! 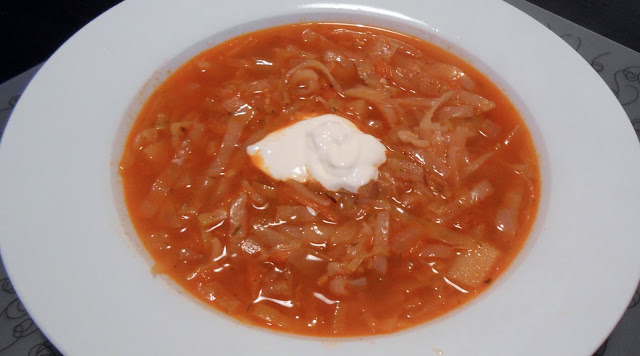 Some soups are born great, and others have greatness thrust upon them.  Some soups, just by their very name conjure up visions of exotic countries, opulence or comfort.

And then there is cabbage soup.

1) Poverty.  Like Charlie Bucket from Charlie and the Chocolate Factory, who's family were so poverty stricken that cabbage soup was all they could afford, this poor soup seemed to be a byword for cheap, bland food.

3) Vile diets.  Think of slimming plans where you have to suffer the awful fate of eating just cabbage soup in order to lose a few pounds.  It tastes awful but hey, you'll look good in a bikini come the summer.

With all this in mind, imagine my horror when I checked the soup ingredients pantry to find that pretty much all we had to create this week' recipe from was (yes) cabbage.  And not the fun, exotic kind, but common or garden white cabbage, like the kind that used to be served boiled to death next to school dinners.  Oh the humanity.

But, what do you know, with a few choice additions, you can actually make a nice cabbage soup - leave it to those crafty Ruskies to come up with a good way of doing it (I assume the Russians we are talking about are the good ones, like Sean Connery in Hunt for Red October and not those guys that killed Patrick Swayze in Red Dawn)

This soup was another that I made, then kept in the fridge for 8 hours to see if the flavour intensified, and what do you know, it really did!

The stars of this soup aren't the cabbage itself, but the extras, like the caraway and dill with white wine (A typically Eastern European flavour combination I may have fallen a little bit in love with), but don't take my word for it how good this soup is.  Grab a cabbage and give it a go yourself.  I promise, comrade, that you won't be disappointed. So until next time, dos vedanya tovarisch!

Method
1.  Remove the outer leaves of the cabbage and the core, then finely shred the rest.  Peel the potato then cut into small cubes, remove the green parts of the leek and cut into slices, finely chop the onion and grate the carrot.

2.  Heat the butter in a large pan and then gently cook the vegetables, along with the garlic, for 10 minutes, into everything starts to soften.

3.  Add the caraway, bay, pepper, tomato puree, stock and vinegar, then bring the soup to a boil, cover and simmer for 30 minutes, until everything is cooked. 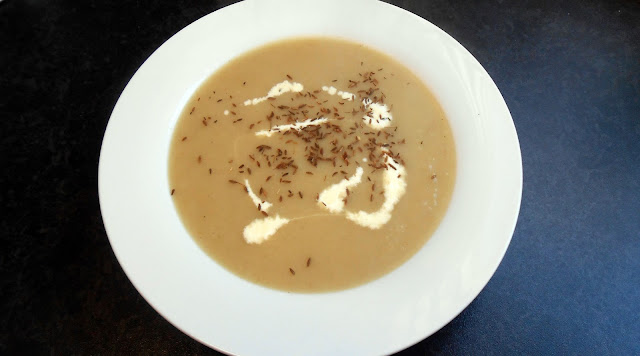 Is summer here yet?  Looking out of the window today, the answer would be a qualified 'yes' but tomorrow we may be knee deep in more snow, so rather than breaking out the light, summery recipes (and I've got some exciting things planned to do with all the wild garlic that is starting to spring up down the side of the canal - speaking of which, does anybody know where I can get my hands on some snails?)

Today's soup is another celeriac recipe.  I use this quite a bit in soups for two reasons - it's amazingly tasty and it also looks like something that may have tried to invade the Earth and been defeated by Tom Baker era Doctor Who (Younger readers may be interested to know several other actors played the good Doctor before David Tennant turned up*)

I also continued my experiemnts with making the soup the day before I ate is, chilling it overnight and I really am beginning to think that it does improve the flavour of soups, especially the blended variety.  If anyone else has thoughts on this, let me know in't comments section! 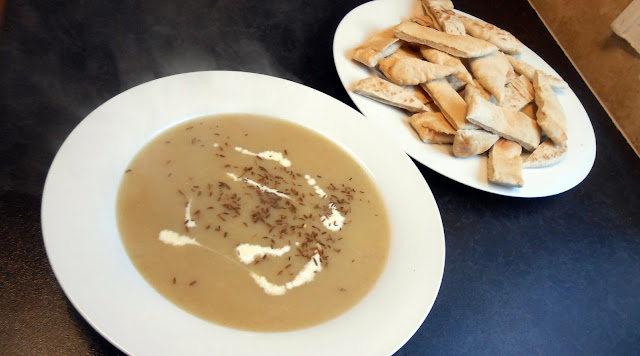 Method
1.  Peel wash the celeriac and potatoes.  Cut them into cubes about 1cm square.

2.  Thinly slice the onions.  Heat the butter in your soup pan.  Gently sweat the onions, garlic, potatoes and celeriac for 10 minutes, until they start to soften.

3.  Add the ground cumin and cook for another 2 minutes, to coat everything in the spice, then add the stock, bring to the boil and simmer for 30 minutes, until everything is cooked and soft.  Remove from the heat and allow the soup to cool.

4.  Blend the soup smooth.  Taste and adjust seasoning and re-heat.

5.  In a frying pan, heat the cumin seeds until they are nicely toasted and giving off a spicy aroma.

6.  Serve in bowls with a swirl of single cream and a sprinkling of toasted cumin seeds.  I also added flat bread as an accompaniment.  Enjoy!