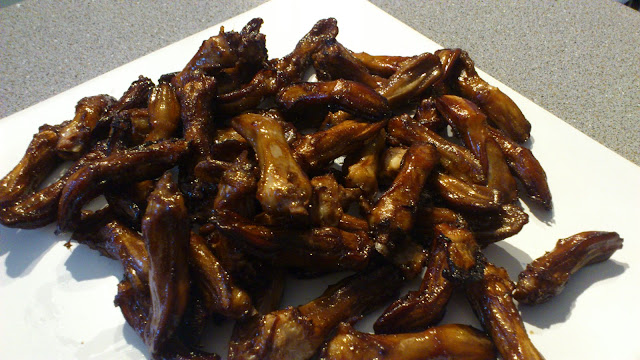 I've become aware, as I have been doing the Olympic Food Challenge, that I could have been a bit more adventurous in my choice of dishes for some countries, and in others maybe tried to find a few more strange and exciting ingredients.  So as today's meal rolled round, I knew that it was time to push the boat out a bit.

Having visited a rather amazing Chinese restaurant in Leeds called Red Chili, I couldn't help but stuff my face with as many dishes as I could that I hadn't tried before, including eel, tripe, heart and tongue.  I would have gone for the frogs legs and crystallised pig's uterus as well, but the horrified faces of the people I was meant to be sharing the banquet with told me it was time to stop.

I love the fact that Chinese cuisine uses all sorts of bits of animals that we would throw away - when I was buying the tongues for this dish, I mistakenly picked up a packet of pig's tendons instead (Come to think of it - I may go back and try those later...)  - and duck's tongues are no exception - they are a strange thing to eat, not least as they have a little bone running through the middle of them, and have a creamy, fatty texture to them.

A quick straw poll of of consumers that tried the tongue (me & Mrs Soup) was that it tasted lovely but looked  like something from the film 'Alien'... (Also, please do not google anything to do with the sex lives of ducks 0 they are perverts.... just sayin'...)

On a more olympic related not - China have won all the medals that are not in the posession of the US or UK teams.  They are quite good at this whole sports malarkey... 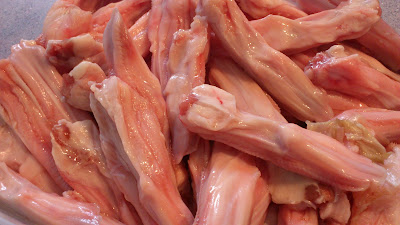 1.  Mix the soy sauce, rice wine and chili sauce together and then use this as a marinade for the tongues.  Put them in a container together and put in the fridge for 3 hours, shaking occasionally so the tongues get thoroughly coated in the mixture.

2.  Drain the tongues by pouring off the marinade.

3.  Mix the cornflour and egg white together and beat lightly until smooth.  Pour this over the tongues and make sure it coats them evenly 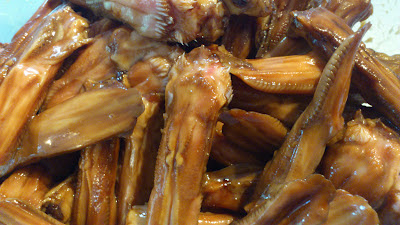 4.  Heat some oil in a wok until it is very hot and then fry the tongues in batches of 5 or so. They only need 1-2 minutes in very hot oil, and be careful not to over cook them.

5.  Serve and eat whilst the tongues are still sizzling from the wok.  Enjoy
Posted by Dan at 20:22