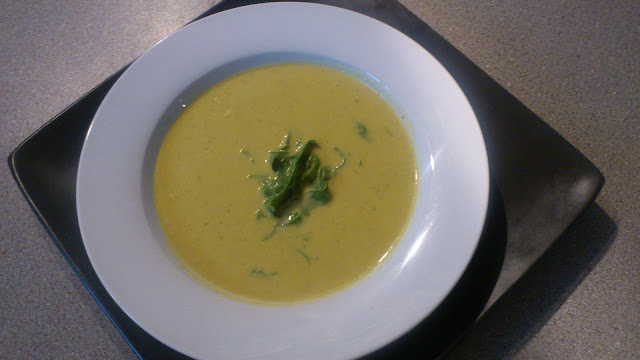 After the craziness of the Olympic Food Challenge, normal service resumes now (although I know it's not Tuesday, but hey, I have made soup).  We have been, for the last few weeks, getting a veg box every week, and so for the next few weeks, I'll be making some random soups, based on whatever comes in the box on a Thursday.

After the random allocation of countries in the Olympic Food Challenge, I like the idea of this.  Also, I was running out of inspiration for new soups every week.  Now I have all the ingredients I need quite literally on my doorstep.

Today's soup is a bit healthy as I've been working odd hours and days this week, eating junk food and generally feeling a bit run down - hopefully all the vegetables will perk me up as I'm working until Sunday (today is my only day off - hence the non-Tuesday soup)

When I blended it all together, I was vaguelly horrifed as it appeared at first glance that I had made piccalilli soup - and I hate piccalilli.  However, after the chard and coconut milk was added, it no longer looked like piccalilli, and definately didn't taste anything like piccalilli. (Did I mention I can't stand the stuff?)

Recipe after the jump >>

Method
1.  Heat the oven to 200ºc.  Cut the cauliflower into large florettes, roughly chop the onion and potato.  In an oven-proof dish, cover the vegetables, along with the garlic cloves in oil and roast for 45 minutes.

2.  When the veg is roasted and starting to go golden around the edges, put into the pan with the spices and cook for 3 minutes, making sure that the vegetables are thoroughly coated in the spices.

3.  Add the stock, bring to the boil and then cover the pan.  Reduce the heat and simmer for 30-40 minutes, adding the chopped courgette and celery.

4.  Once the vegetables are soft, take the pan off the heat and leave to cool, then blend until smooth, passing through a sieve to remove any lumps and return to the pan.

5.  Stir in the coconut milk and reheat. Just before serving, add a handfull of finely sliced chard leaves and let them wilt in the soup, then serve and enjoy!
Posted by Dan at 18:51