In Search of Perfection – Steak the Heston Way.

Today's guest blog is from Louise Pegg (She's on twitter here Why not stop by and say 'hi') She's writing about her experiences of following the method of cooking the perfect steak as suggested by everybody's favourite chef/boffin, Heston Blumenthal (and why aren't there more boffins these days?  Since when did being an eccentric scientist become something to be frowned on?  Barnes Wallace would be bouncing in his grave...)


Louise describes herself as...

We are two fortysomethings who live in sin  in a small cottage at the most northerly navigable point of the Norfolk Broads. We both work full time in FE and HE, have two cats and an elderly horse that lives in her  own bachelorette pad some distance away. We have no religion, our faith lies in good food and being nice to eachother although we have several obsessions that include sci-fi, comedy and serial killers. We love to cook and grow stuff  but our skills in both are rather hit and miss. some things we do well and others we fail at spectacularly. We will happily have a bowl of cornflakes for tea if the mood takes us and we rent a lifestyle we couldn't possibly afford to buy.

Heston Blumenthal is always a joy to watch on the TV. Whether he is taking on tricky Little Chef bigwigs or creating a fantasy dinner for a bunch of lucky celebs, his abandoned pleasure in whatever process he is inventing is infectious and inspiring. That is, he inspires me to go out and eat at least but undertaking many of his recipes requires a great deal more thought.

We have owned his second book, Heston Blumenthal: in search of perfection, for 6 years but have yet to undertake any of the recipes within. It is based on a 2006 TV series searching for the perfect version of such classic dishes as roast chicken, fish and chips and Black Forest gateau. Heston does a lot of research into what makes these dishes great and the ultimate methods by which to recreate them.

The recipes in the corresponding book are the results of this research simply committed to paper and, to be honest, require a degree of commitment and moral fibre, not to mention some (relatively) serious kit, that Delia or Jamie just don’t expect of us mere mortals.

So it is that two weeks of annual leave have come around and, as we can’t afford a holiday, we go for the next best thing which is to finally have a go at one of these recipes and test The Great God Heston’s teachings to their fullest. What follows is a tale of personal growth and a test of faith so harrowing you may need a stiff drink before you read it.

Day 1
We scan through the book looking for the right recipe and settle on a combination of the steak with the roast potatoes from the chicken recipe (rather than the salad that Heston dictates to accompany the steak) as our perfect dinner. Already we are showing worryingly maverick tendencies to ignore the explicit recipes and 'make it up'. We also don’t bother with the mushroom ketchup because we can’t be arsed. This doesn’t bode well for anyone does it?

We choose steak as it’s something we just don’t buy very often so it’s a double treat  and the recipe only calls for 4-6 hours cooking so it seems very doable. Another attractive quality is that we need to layer butter and blue cheese and let the flavours blend for at least two days. These ingredients are already in our fridge so we can get started straight away and gain a little bit of instant gratification by creating an attractive parcel of parchment paper tied up with string.

Returning to the book we skim through the chapter in which Heston goes on a journey; no sorry it's more of a Journey, through the USA in search of the perfect cut of steak. We cherry pick words and phrases such as 'marbling' and 'dry hung' then skip to the end (I hope Heston never reads this - he'll cry in to his dry ice machine). The recipe requires one 'well aged, two bone fore rib of beef on the bone'. We discuss where to get this and half-heartedly consider asking a local butcher. Strangely, the thought of squaring up to any of North Norfolk’s no-nonsense purveyors of meat reduces both of us forty-somethings to ‘I will if you will’ sensibilities. I would happily go and ask but I’d really want my 6’1” OH standing right behind me. We gloss over it and agree to worry about it later.

Days 3 and 4
Family commitments take us away for a couple of days so the butter and blue cheese gets extra time to blend. This can only be a good thing and increase its ability to ‘capture the nutty, cheesy character of aged beef’.

Day 5
OH goes rebel cop and buys two ribeye steaks from Waitrose whilst I am otherwise engaged. I express my scepticism that they will be marbled or properly aged enough and a certain frostiness rests between us. I feel we have let Heston down.

I sneak a peek at them later, actually they look really nice. They have been dry hung too. Maybe Heston will look kindly upon us after all. I make OH a sponge cake in apology. 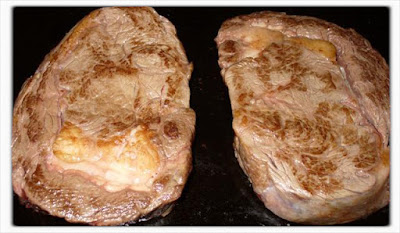 Day 6
We read the recipe again and realise that the steak has to be in the 50 degree oven for at least four hours just to get up to temperature! Then it stays in for 18 hours! We also forgot to buy a digital meat probe and an oven thermometer.

It seems to be very important to have the right temperature and Heston explicitly states that the steak must not get over 50 degrees or the recipe will be ruined. He doesn’t say why. OH concludes that if it gets over 50 a bus will explode. This is not something we want on our collective conscience so put the candy thermometer in the oven and hope that will work instead. My reasoning is that at only 50 degrees the plastic is unlikely to melt.

6pm: The steak is seared at high heat [see pic] as this starts a process called the Maillard reaction which, the Writings tell us, adds fantastic depth and complexity to the meat. Actually this is how we would normally cook (maybe a bit longer) and eat it. The steaks are ceremoniously put in the oven at 6pm. 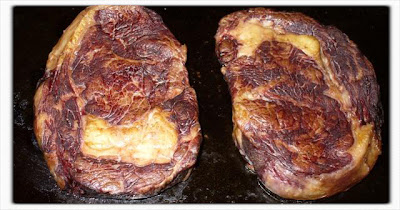 9pm: panic sets in as we check the temperature and the steak. It is at 50 but appears to be drying out on top (see pic).

Is this what is meant to be happening? Heston doesn't tell us. We decide, as we have a fan oven, that maybe the cooking time should be less to compensate. We go for a 12 hour shift - with the 3 hours it has already been in the oven that will total 15. At least 7 hours less than stated. We toy with taking it out altogether but decide we have come this far we will stick with it (if you attempt this I advise that you get a friend to join you in the undertaking – you will need someone to convince you to carry on in your darkest moments of doubt). Maybe Heston is testing our willingness to sacrifice a loved one in the manner of Abraham?

Day 7
9am: We take the steak out of the oven and it looks like this (see pic).

It still feels squishy so maybe it will be ok. We find a little reference later in the chapter to ‘trimming off any charcoal exterior’. We feel a bit better.

The steak has to cool completely and rest for at least 4 hours before frying. 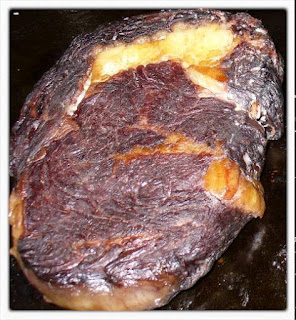 5pm: Dinner is delayed when we find a poorly hedgehog and have to rush him to the Hedgehog Rescue centre at Trunch. The lady is very kind and we leave him with her and with our choice of name if he is a boy. Heston.

7pm: we are starving and hurriedly peel and cut the Maris Piper spuds. We cut them small so they will cook more quickly but ensure they have sharp edges as dictated. They are boiled (with the peelings in the pan to add flavour) then popped in to a roasting pan full of fat. Actually Heston tells us olive oil is fine. We are doubting Thomases and stick with the well- known goose fat method.

Once the spuds are golden brown all over we pan fry the steaks in a film of oil. Heston tells us four minutes but we opt for two because we think our inferior ribeyes will be thinner than his recommended cuts. The butter is melted and dinner is served.

Was it any good? Oh my. Take a look at the picture. It really WAS perfection. 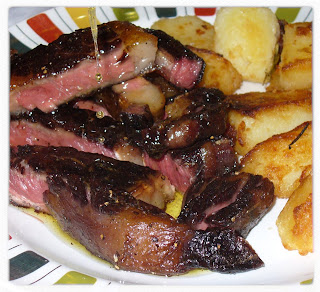 The potatoes were perfectly fluffy on the inside and golden and crispy on the outside. They had a terrific flavour and were delicious. I suspect any type of potato would have come out pretty well with this fool proof recipe but the Maris Pipers did have something very special in flavour and fluffiness.

The steak was fabulous. I wasn’t at all convinced I wanted or needed this crust that developed on the outside but I really did!  It held a lot of flavour and the contrast of textures between the crust and the soft tender middle was wonderful. Our steak may have been a little underdone compared to the picture in his book so perhaps next time we will fry it for longer and leave it in for the full 18 hours. Nonetheless it was melty and gorgeous and we savoured every mouthful with rapture. Next time (we can’t wait to try it again) we will stick more closely to the recipe and we are even talking about trying it with lamb chops and other cuts.

Maybe we didn’t do it completely right and it might not be exactly what he intended but Heston, you made believers out of us.


NB for kitchenalia geeks the crockery is a vintage 1960’s Midwinter pattern ‘Mexicana’. Look out for it at carboots and charity shops as it is usually priced quite highly on ebay [although no-one seems to buy it].