After several weeks of not participating in the Weekly Bake Off, I was raring to go with this week's bake : Apricot loaf cake. The only ingredient I needed to buy were the dried apricots, and so after picking them up on the way home on Thursday I threw this together after dinner on Thursday night. It is a very simple recipe - everything get put into 1 bowl, mixed and then poured into the loaf tin, so it is very low-stress. It smelt lovely while baking, and we dived straight into it almost as soon as it was out of the oven.

Mr Soup loves fruit loaf, and this didn't disappoint, being full of apricots, cherries and raisins. I don't think that the icing added much, though it was a nice touch to be able to sprinkle some more apricots on top. I probably wouldn't make this again, but only because I have other recipes for darker fruitloafs, but probably will be adding dried apricots to other fruit cakes in the future. 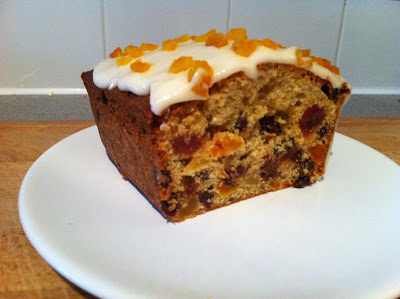