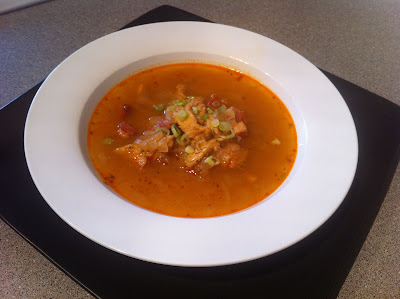 This one has been a long time coming!  I've had my eye on making something with tripe in it since I started writing this blog.  As regular readers will know, I have two culinary obsessions - black pudding and dumplings - and I would say that the first one extends to all manner of offal and unusual meat stuffs.

After a visit to a really nice Chinese restaurant, I had tripe for the first time and really liked it, despite horror stories from my Mother about how awful it was.  My grandfather apparently loved it, and I have memories of seeing it in the butcher's shop we used to shop in when I was a child.  I was fascinated by it, looking more like fish than meat, and vowed to eat some, even going to far as to pester my mother to get some - a wish she never acquiesced to.

But now I am master of my own shopping list, I have finally gotten round to making some tripe soup - a slow cooked mexican affair which also uses a pig's trotter, but only to thicken the soup.

It's apparently the texture of tripe that people can't stand, but I would say that it's very similar to squid or octopus (however, I'm aware that there are a large number of people who don't like those either...) and it's worth trying at least once, just to say you've done it and not be swayed by others opinions.

And now tripe is checked off my list, I'm hunting for tongue and lung soup recipes...


Method
1. Wash the tripe in warm water, then put in a bowl, sprinkle with salt and then squeeze the juice of a lime over it.  Leave to stand for 30 minutes and then wash again in warm water 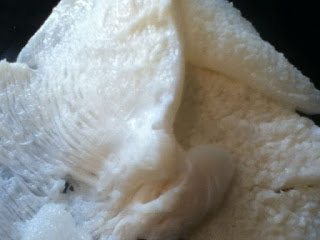 2. Cut the tripe into thin strips, then put into boiling water, simmer and cook for 15 minutes.

3. In a large pan, put the drained tripe, pig's foot, stock, onion, garlic and oregano.  Bring to the boil and then simmer for 2 hours.

4. Using a blow-torch, sear the outside of the chilies until the skin goes black.  Let them cool and then peel to charred skin off. 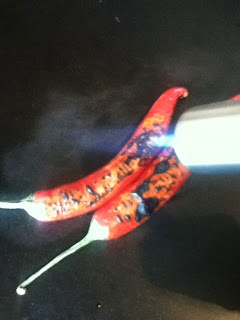 5. In a blender, put a ladleful of stock from the tripe pan, the chilies and ground cumin seeds.  Blend this until smooth, then add to the pan with the tripe in. Remove the pig's foot at this point. 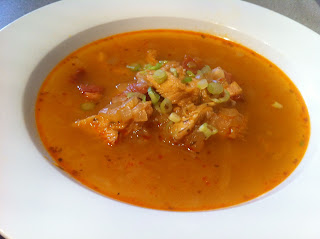 7.  Serve with slices of lime and garnish with sliced green onions.  Enjoy!
Posted by Dan at 19:38